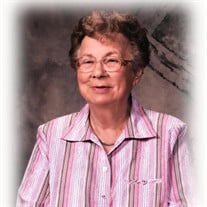 On December 14, 2017, Norma Sylvia Sather went home to be with her Lord and Savior. She passed away peacefully with her loving family surrounding her. Family was everything to Norma. Norma Sylvia Wisted was born November 25, 1926, at Killdeer,in Dunn County, North Dakota in a sod house to Esther and Iver Wisted. Norma was so proud of the fact she was born on Thanksgiving and baptized on Christmas Eve. Norma married Bennie Sather on September 4, 1946. They lived in Fargo until the early 50’s when they moved to a farm north of Oriska where they built a loving legacy. Bennie and Norma raised their five children on the farm and neighbors quickly became family and friends.After they retired, Norma and Bennie spent over twenty years traveling the United Stated in their motorhome. Norma never met a stranger; everyone was a friend or pal. Norma LOVED music. One of her favorite things to do was entertain an audience by playing her accordion or piano. She had many jam sessions with her accordion whether at a campground, nursing, home or in her home. She played for anyone who wanted to listen. Her pastimes were spent playing cards, any game, fishing, and watching sports. Norma’s favorite sport was basketball,which she spent over 75 years watching or playing and thoroughly enjoyed watching her great grandson Bryce play. Another Love of Norma’s was the love of traveling with her family. Norma traveled all the time with her family over the years, including Montana, Canada, California, Washington DC, New York, Boston, South Carolina, Nashville for an NCAA basketball tournament, and her last “Big” traveling trip was an AAU Basketball trip with teenage boys and her family to Kentucky. How fitting for that to be her last big trip. During her last years in the winter, Norma lived with Susan and Steve in Bryan, TX.In the summer, she lived atThe Legacy in Valley City. Norma is survived by her children Tom Sather, Marlin, TX; Bev Archer, St. Cloud, MN; Duane (Jackie) Sather, Jamestown, ND; Susan (Steve) Willert, Bryan, TX; Joan (Doug) Wenzel, Alexandria, MN; 12 grandchildren, 10 great grandchildren, and 5 great-great grandchildren. She was preceded in death by her loving husband, Bennie, her mother, Esther; her father, Iver; four brothers, Arland, Kermit, Harmon, and Ike Wisted. She is survived by her sisters Evangeline Badger, Selma Tuenge, and Evelyn Delmore and her brothers Elmo and Norman Wisted.

On December 14, 2017, Norma Sylvia Sather went home to be with her Lord and Savior. She passed away peacefully with her loving family surrounding her. Family was everything to Norma. Norma Sylvia Wisted was born November 25, 1926, at Killdeer,in... View Obituary & Service Information

The family of Norma Sylvia Sather created this Life Tributes page to make it easy to share your memories.

Send flowers to the Sather family.