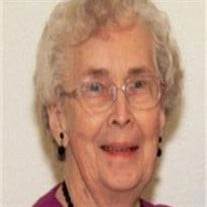 Norma Rilla Berg was born April 7, 1931, in Bottineau, ND to Leonard and Julia (Hust) Berg. She was the oldest of 8 children. The family moved to Litchville in 1945 when her father purchased the Litchville Bulletin. Norma graduated from Litchville High School in 1949. She attended nurses training at St. John’s Hospital School of Nursing in Fargo, ND for two years. Norma married Robert A. “Bob” Miedema on October 18, 1951. She was a homemaker until after their youngest child entered school. She then worked at the Litchville Bulletin for 9 years, eventually purchasing the newspaper and being the Editor and Publisher for 19 years. Norma was active in the First Reformed Church, serving in offices of the Reformed Church Women’s Ministries on the local, state and denominational levels. She served as Sunday School superintendent and teacher, Catechism and Vacation Bible School teacher, Deacon, and Treasurer. Norma was also active in the business community. She served as secretary of the Litchville Commercial Club for over 20 years and served on various Fall Fair committees as well as the Barnes County Council on Drugs and Alcohol Abuse, Reformed Church Cemetery Association and the Litchville Community Center Board of Directors. She was a member of the Litchville 2000 committee and co-authored the Litchville history book covering the first 100 years of the community from 1900-2000. She was often sought out by former residents or their families wanting to learn the history of ancestors. Norma enjoyed researching the Berg and Miedema family histories as well. Norma enjoyed reading, camping, gardening, quilting and putting together photo albums and scrapbooks. One of her favorite places for camping was Loon Lake, Vergas, MN. Her quilting group was dear to her and she would go to great lengths to schedule other appointments or activities around quilting days. Norma’s strong faith was apparent to all. She found peace, joy and strength in special Bible verses and religious songs. Her faith led her through the tragic death of her son, Bryce, on August 11, 1974 when he was 18 years old. She has now been reunited with him in heaven. Those left to share her memory include her husband of 61 years, Robert; her daughters, Diane (S. Bradley) Peterson of Burlington, CT and Pensacola, FL, Sheila (Hal) Peterson of Bismarck and LaRae (Steven Mangrum) Miedema of Pflugerville, TX; her grandchildren Sean Peterson, Burlington, CT, Darya (Matt) Peterson-Glass, Santa Fe, NM, Lisa (Sean) Lund, Bismarck, Rachel (Bill) Mount, West Fargo, Wayne (Beth) Smith, Litchville, Lauren Smith, West Fargo, and Stefanie Mangrum, Chico, CA; her great grandchildren, Dylan Lund, Andrew and Emma Mount and Addison and Jada Smith; her brothers Kenneth Berg, Lodi, CA and Ronald (Darlene) Berg, Mesa, AZ; her sisters Carol Opdahl, Mesa, AZ, Joan (Ronald) Trapp, Marion and Laura Berg, Kindred; her sisters-in-law Carol Berg, Detroit Lakes, MN, Maxine Muske, LaMoure, Darlene Miedema and Elaine Miedema, both of Valley City; and her aunt Helen Manns, Bismarck. Preceding her in death were her son, Bryce, her parents; a grandson, Clinton Mangrum; her mother-in-law and father-in-law, Andrew and Ruth (Rohrbeck) Miedema; her brothers Glenn and Vernon Berg and her brothers-in-law Herman Muske, Ernest Miedema and Stanley Miedema.

Norma Rilla Berg was born April 7, 1931, in Bottineau, ND to Leonard and Julia (Hust) Berg. She was the oldest of 8 children. The family moved to Litchville in 1945 when her father purchased the Litchville Bulletin. Norma graduated from Litchville... View Obituary & Service Information

The family of Norma Miedema created this Life Tributes page to make it easy to share your memories.

Send flowers to the Miedema family.