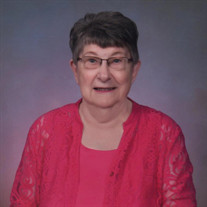 Norlene's funeral mass will be viewable at https://vimeo.com/662021367 Norlene Reberg, 85, of Valley City, passed away peacefully on December 28, 2021 in CHI Mercy Health due to complications of a stroke. Norlene Elizabeth (Hovel) Reberg was born October 25, 1936, to Joseph and Emma (Keierleber) Hovel in Griggs County, ND. She attended school in Cooperstown and graduated from St. Catherine’s School. On November 18, 1958, she was united in marriage to Erling Reberg at St. George Catholic Church in Cooperstown. They resided in Valley City for a short time before moving to the Reberg family farm near Hastings where they raised their family, crops and cattle. She moved to Valley City in 2010. Among other places Norlene worked for the ASCS office in Valley City, after her children reached school age she returned to the workforce at the Kathryn Mutual Elevator, retiring in 2002. Norlene was a long-time member of Barnes County Homemakers, a 4-H leader, volunteered at the Hospital Gift Shop, a member of St. Catherine’s Church and the Ladies Auxiliary. She enjoyed spending time with family, cards with friends, baking and cooking for her family always having coffee and a sweet for visitors. She was always game for a trip to a casino. While frustrated if “it didn’t work right” she picked up modern technology and loved to spend time on her iPad. Norlene is survived by her daughters, Bonnie of Fargo, Susan (Wesley) Larson of Leonard and Sandra (Kurt) Wagner of Wimbledon, daughter-in-law Ruth Reberg of Bismarck, grand children Dawn (Tyler) Rispa, Faith Reberg, Matthew (Kelsey) Larson, Katie (Cory) Jorgensen, Bryan (Nicole) Larson, Jacob Reberg, Kayla (Tyler) Bennefeld and Kody Wagner, great grandchildren Elizabeth Larson, Sawyer Rasmussen, Hunter Anderson, Owen Schwehr, Charles Jorgensen, William Jorgensen, Rynna Jorgensen, Harrison Jorgensen, Ethan Larson, Madelyn Larson, Leyton Bennefeld, Beckett Bennefeld and Tovi Bennefeld, sister-in-laws Lois Hovel of Valley City and Coral Reberg of Mercedes, TX as well as many nieces and nephews and their families. She was preceded in death by her husband, sons Timothy, Daniel and an infant son, her parents, a brother Larry Hovel, great granddaughter Kathryn Jorgensen. In lieu of flowers consider donations to Spring Creek Cemetery Fund or your charity of choice. Funeral will be held at St. Catherine’s Catholic Church on Wednesday January 5 at 10AM with visitation one hour before the service. Funeral arrangements have been entrusted to the care of the Oliver-Nathan Funeral Chapel, Valley City. An online guestbook and video streaming are available at www.oliver-nathanchapel.com

Norlene's funeral mass will be viewable at https://vimeo.com/662021367 Norlene Reberg, 85, of Valley City, passed away peacefully on December 28, 2021 in CHI Mercy Health due to complications of a stroke. Norlene Elizabeth (Hovel) Reberg was... View Obituary & Service Information

The family of Norlene Elizabeth Reberg created this Life Tributes page to make it easy to share your memories.

Send flowers to the Reberg family.