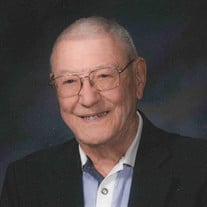 The funeral service for Neil Mulock, Sr. 88, Valley City, ND will be 11 am Monday, November 17, 2014, at Epworth United Methodist Church, Valley City, with Pastor Dayne Zachrison officiating. Burial will be in Hillside Cemetery, Valley City. He died at Sanford Hospital in Fargo, ND on November 14, 2014. Visitation will be 2 pm to 4 pm Sunday at the Oliver-Nathan Funeral Chapel and one hour before the service at the church. Neil Manfred Mulock was born July 17, 1926 in Sparta, Wisconsin, the son of James Raymond and Esther Marie (Zimmerman) Mulock. As a young man he moved with his parents to the Milnor, ND area where he grew up on a farm and attended Milnor High School where he graduated in 1944. Neil was united in marriage to Mabel Kinzler on July 20, 1948 in Milnor. They made their home in Milnor and later moved to Hunter, ND where Neil was a parts man for an implement dealer. In 1964, they moved to Valley City where he worked in the parts department for a car dealership. Neil worked for Dietrich Bus Service for many years. Mabel died on May 13, 2010. In 2012, he made his home at Bridgeview Estates. Neil and Mabel both loved to travel and were members of Good Sam Club. He also enjoyed woodworking and painting pictures. Neil was a member of Epworth United Methodist Church and the Gideons and was a former member of the Valley City Troubadours. Neil is survived by a son, Rev. Neil M. “Skip” (Rev. Judy) Mulock, Jr., Waterloo, Iowa; daughters, Marla (Scott) Wonser, Casper, Wyoming; Gerri (Wayne) Hammond; Cori Maxwell, Anchorage, Alaska; 12 grandchildren, 21 great grandchildren and 1 great-great granddaughter. A sister, Loretta Thome , Chicago, Illinois also survives. He was preceded in death by his wife, 2 grandchildren, Larissa Hammond and Aaron Mulock; a son-in-law, Edwin Maxwell; two brothers and one sister. Funeral arrangements have been entrusted to Oliver-Nathan Funeral Chapel, Valley City. An online guestbook is available at www.oliver-nathanchapel.com

The family of Neil Manfred Mulock created this Life Tributes page to make it easy to share your memories.

Send flowers to the Mulock family.