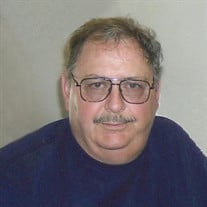 Neal Busche, 73, Valley City, ND passed away Sunday, April 4, 2021 in his home. A graveside service with military honors will be held 11:00 am, Friday, April 9, 2021 at Trinity Lutheran Cemetery, Litchville, ND. Neal Edward Busche was born May 21, 1947 in Valley City to Harold and Irene (Bickett) Busche. He graduated from Litchville High School in 1965. Neal served in the United States Army during Vietnam. Upon his discharge he lived in Denver, CO where he worked for Coors Porcelain. Neal later moved to Valley City to care for his parents. He also worked for CASE in Fargo, ND before retiring in 2011. Neal enjoyed yard work, cooking and gardening. Most of all, Neal loved his dogs, having poodles and pomeranians throughout his life time, especially his fourteen year old dog, Daisy. Neal is survived by his brothers Gerold Busche, Valley City, Glenn (Cheryl) Busche, Salem, OR; sisters, Carol Busche, Valley City, Jane Publow, West Des Moines, IA and several nieces and nephews. Neal is preceded in death by his parents and his brother Lyle Busche. Funeral arrangements have been entrusted to the care of Oliver-Nathan Funeral Chapel. An online guestbook is available at olivernathanchapel.com

The family of Neal Busche created this Life Tributes page to make it easy to share your memories.

Send flowers to the Busche family.