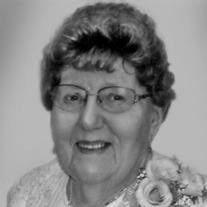 Myrtle Carlson was born July 24, 1917 in Marshall County, SD, the daughter of Oscar and Hilda (Dahlquist) Carlson. She attended country school and was a graduate of Langford High School, Langford, SD. On August 30, 1937, she married Freeman C. Mjolsness at Groton, SD. They made their home in Dazey, ND, where she ran the telephone office and he operated a barber shop. In 1945, they moved to Fargo, where Myrtle attended New York Hair Dressing Academy. They lived in Tolna, ND, and Hannaford, ND, operating barber and beauty shops. In 1958, they moved to Valley City, ND, and commuted to Hannaford and Pekin, ND, to run their shops. Myrtle and Freeman were members of Our Saviour’s Lutheran Church and worked as custodians at the church as well as at Fidelity Savings and Loan, Valley City. They were active at the Barnes County Senior Center, where they participated in the Senior Center Band and Myrtle was the weekend manager for many years. Myrtle enjoyed creative writing, crocheting and painting. She treasured family time that usually included good food, games and singing. Myrtle died at the Sheyenne Care Center, Valley City, on January 8, 2013 at the age of 95. She is survived by her sons, Freeman (Arlene) of Plymouth, MN; Paul of Peoria, AZ; and Randy (Jodi) of Billings, MT; two grandchildren, Julie (Brent) Lindstrom and Melinda (Tim) Reiter; five great grandchildren, Andrew, Joseph, Anna, Audrey, and Bridget; a brother, Victor (LaVonne) Carlson of Aberdeen, SD; and several nieces and nephews. She was preceded in death by her parents and husband, Freeman.

Myrtle Carlson was born July 24, 1917 in Marshall County, SD, the daughter of Oscar and Hilda (Dahlquist) Carlson. She attended country school and was a graduate of Langford High School, Langford, SD. On August 30, 1937, she married Freeman... View Obituary & Service Information

The family of Myrtle Mjolsness created this Life Tributes page to make it easy to share your memories.

Send flowers to the Mjolsness family.