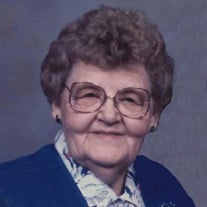 The funeral service for Myrtis E. Clauson, 94, Valley City, North Dakota formerly of Kathryn, North Dakota will be 10:30 a.m. Monday, September 7, 2015 at Waldheim Lutheran Church, rural Kathryn, with Rev. Bradley Edin officiating. Burial will be in the Waldheim Cemetery. She died Friday, September 4, at Mercy Hospital, Valley City. Visitation will be 3 pm to 5 pm Sunday at the Oliver-Nathan Funeral Chapel and continue on Monday one hour before the service at the church. Myrtis Evangeline Mikkelson was born September 20, 1920 near Kathryn, North Dakota, the daughter of Severin and Turina (Solheim) Mikkelson. She attended Daily School #3 near Kathryn. After her schooling she worked for area farm families before her and her sister Delores went out to Washington and worked for Boeing for a time in the early 40’s. After moving back, Myrtis was united in marriage to Elmer Clauson on December 3, 1945 in Kathryn. They farmed near Kathryn until retiring in 1985. Elmer died April 18, 2005. Myrtis had moved to Valley City in May of 2015. She was a member of Waldheim Lutheran and was very active in WELCA and had taught Sunday school for many years. She also served as a 4-H leader for several years. Myrtis is survived by her daughter, Jeanette (Harlan) Hanson, Kathryn; 11 grandchildren and 11 great grandchildren. She is also survived by her sisters, Delores Ross, Kathryn and Jean Lenox, Seattle, Washington. She was preceded in death by her parents, husband, two daughters, MarJean Cunningham and Joyce Ertelt and three sons, Myron, Donald and Kenneth. Funeral arrangements have been entrusted to the care of the Oliver-Nathan Funeral Chapel, Valley City. An online guestbook is available at www.oliver-nathanchapel.com

The family of Myrtis Evangeline Clauson created this Life Tributes page to make it easy to share your memories.

Send flowers to the Clauson family.