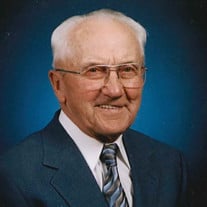 The funeral service for Morris C. Peterson, 95, Valley City, North Dakota, formerly of Hastings, North Dakota will be 1 pm Friday, January 13, 2017 at the Oliver-Nathan Funeral Chapel, Valley City. Burial will be in the spring at Spring Creek Cemetery, Hastings. He died Sunday, January 8, 2017 at Mercy Hospital, Valley City. Visitation will be 10 am to 1 pm at Oliver-Nathan Funeral Chapel on Friday. Morris Clifford Peterson was born January 11, 1921 at his parent’s, Ole and Clara (Norberg) Peterson, home. He attended school in Hastings, graduating in 1938. Morris had served briefly with the US Army and was a member of the National Guard Company G. He attended Valley City State University for a year and a half before he began farming his parents land forming a partnership with his brother, Clinton, which lasted 60 years. Morris was united in marriage to Ruth Nelson formerly of Litchville on March 18, 1956 in Corte Madera, CA. They made their home back on the farm near Hastings. They retired in 1999 and in 2010 they made their home in Valley City. In August, 2014 they move into The Legacy Place. He had been a member of Spring Creek Lutheran Church, Hastings and First Lutheran Church, Litchville. He enjoyed hunting and fishing. Morris is survived by his wife, Ruth; a brother, LeRoy Peterson, Seattle, Washington; a sister-in-law, Lois Peterson, Valley City and several nephews and nieces. He was preceded in death by his parents; brothers, Clinton, Reynold, Harvey; and a sister, Evelyn Neumann and two nephews and a niece. Funeral arrangements have been entrusted to the care of the Oliver-Nathan Funeral Chapel, Valley City. An online guestbook is available at www.oliver-nathanchapel.com

The family of Morris Clifford Peterson created this Life Tributes page to make it easy to share your memories.