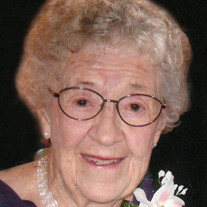 Mildred “Millie” Trapp age 101 of Pine City, MN, formerly of Valley City, ND, passed away on Sept. 14, 2014. Mildred Geneva Hanson was born to Lewis Melvin and Mabel (Petersen) Hanson on Aug. 31, 1913 in Nome, ND. She married Herbert Trapp on Ap. 16, 1932. They resided in Lucca, ND until 1977 when they moved to Valley City, ND. After the death of her husband in 1995, Millie continued to live in Valley City until 2004 when she moved to Pine City, MN to live with her daughter. Millie was a seamstress, a barber and hairdresser, a gardener and a baker, all for family and friends. It was said by her family that she never met anyone she didn’t call a friend. Millie is survived by her daughter Marlene Sprunk of Pine City, her son Howard (Diane) Trapp of Valley City, grandchildren Diane, David and Joy, Jennifer and Luke, 10 great grandchildren Ashley, Lacey, Jason, Janelle, Jared, Jeffrey, Jakob, Julia, Simon and Emma, 4 great great grandchildren Chloe, Samuel, Christian and Tyler. 2 sisters: Lois Whiteman of Arizona, Margaret Whitwood of Illinois, and many nieces and nephews. Millie was preceded in death by her parents, her husband Herbert “Happy” Trapp, 8 sisters and brothers, son-in-law Ken Sprunk and 1 granddaughter. Funeral services are scheduled for 1:30 p.m. Friday, Sept. 19th at the Pine City Evangelical Free Church Lighthouse in Pine City, MN. Visitation will be 1 hour prior to the service at the church. Interment will be in Memory Garden Cemetery in Valley City, N.D. Arrangements are with the Swanson Funeral Chapel of Pine City, MN and the Oliver-Nathan Funeral Chapel of Valley City.

The family of Mildred Trapp created this Life Tributes page to make it easy to share your memories.

Send flowers to the Trapp family.