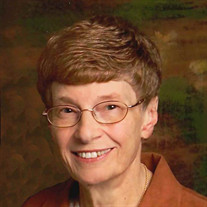 Mildred Hanson, age 77, died in her home in Valley City, N.D. with her family at her side. Mildred D. Hanson was born September 22, 1938 in Valley City to Ragnvald and Helen (Mennis) Sandness of LaMoure, N.D. Milly grew up near LaMoure, attending a country elementary school and graduating from LaMoure High School. She was employed as Deputy Register of Deeds for LaMoure County from 1956-1960. On June 18, 1960 she was united in marriage with Richard Hanson at High Prairie Lutheran Church rural LaMoure. They farmed near Litchville, N.D. until moving to Valley City in 1965. Milly spent 38 years with the Valley City Police Department as a secretary to the police chief and the detectives. She was also clerk of Valley City Municipal Court for many years. She was known as fair and especially compassionate towards those appearing in court. Milly loved her Epworth Methodist Church and served on many church committees throughout the years. She was a very active member of P.E.O. chapter A and was always appreciative of the love and support of her P.E.O. sisters. Milly’s life had a positive input on those with whom she met throughout the years. She was an avid reader and pinochle player. She loved the feel of a good book and a winning pinochle hand. Milly is survived by her husband Richard; sons David (Tami) of Wyndmere, N.D. and Mark (Cathy) of Fargo, N.D.; grandchildren Devin (Marissa) Hanson of Detroit, MI; Christian Hanson, Sioux Falls, S.D.; Molly Hanson and Emily Hanson, both of Fargo, N.D.; brothers, Roger (Linda) Sandness, Brookings, S.D. and Paul (Patty) Sandness, Bismarck, N.D.; and sister Lois (Roger) Dohrmann, St. Joseph, M.N. Milly was preceded in death by her parents Ragnvald and Helen Sandness and her sister Marilyn (Dale) Roesler. Funeral services will be held on Saturday, October 24 at 10:30 am at Epworth United Methodist Church in Valley City, N.D. Burial will be at High Prairie Lutheran Church Cemetery of rural LaMoure, N.D. Visitation will be Friday, October 23 at Epworth United Methodist Church in Valley City from 5:00 to 7:00 p.m., with a prayer service at 7:00 p.m. Funeral arrangements have been entrusted to the care of the Oliver-Nathan Funeral Chapel, Valley City, N.D. An online guestbook for Milly is available at www.oliver-nathanchapel.com

Mildred Hanson, age 77, died in her home in Valley City, N.D. with her family at her side. Mildred D. Hanson was born September 22, 1938 in Valley City to Ragnvald and Helen (Mennis) Sandness of LaMoure, N.D. Milly grew up near LaMoure, attending... View Obituary & Service Information

The family of Mildred D Hanson created this Life Tributes page to make it easy to share your memories.