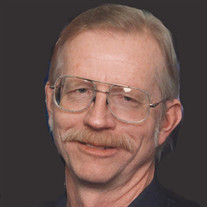 The funeral service for “Mike” William Michael Lubeck, 72, of Valley City, ND will be 2:00 PM Friday, March 20, 2020 at Oliver-Nathan Funeral Chapel, Valley City. Visitation will be one hour prior to the service. Interment will be in Hillside Cemetery, Valley City in the spring. Mike passed away Friday, March 13 in Sanford Fargo. “Mike”, the son of William and Nola (Pope-Cummings) Lubeck was born July 26, 1947 in California. He attended Castro Valley High School. Following his graduation he was drafted to Vietnam for three years before returning to California where he married Sandy and had two daughters, Danyelle and Kirsten. Mike worked as a trucker, and then began working as a janitor in the Hayward School System. He also worked nights and weekends for Toys-R-Us. In 1998 Mike moved to Valley City, ND. On April 26, 2002 he married Wanda (PerDue) Lubeck. He worked at the North Dakota Winter Show, drove pilot cars, and was currently employed at RTS Shearing in Jamestown, ND where he was known as “Blu”. Mike had a kind heart to all people and animals. He most recently was the caregiver for his wife, Wanda, for the last ten years. Mike is survived by his wife Wanda, Valley City, ND; Daughters, Danyelle Lubeck, Marysville, CA and Kirsten Lubeck, Modesto, CA; step-son, Orlin PerDue III, Bismarck, ND; step-daughter Tova (Ken) Kunze, Fargo, ND; four grandchildren; seven step-grandchildren; two step great grandchildren; and brothers Patrick Cummings, WA and Daniel Lubeck, CA. He was loved and will be missed. Funeral arrangements have been entrusted to the care of Oliver-Nathan Funeral Chapel, Valley City. An online guestbook is available at www.olivernathanchapel.com.

The funeral service for &#8220;Mike&#8221; William Michael Lubeck, 72, of Valley City, ND will be 2:00 PM Friday, March 20, 2020 at Oliver-Nathan Funeral Chapel, Valley City. Visitation will be one hour prior to the service. Interment will... View Obituary & Service Information

The family of Mike Lubeck created this Life Tributes page to make it easy to share your memories.

The funeral service for “Mike” William Michael Lubeck, 72, of...

Send flowers to the Lubeck family.