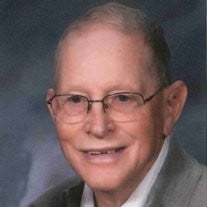 The memorial service for Melbourne Etzell, 88, Valley City, ND formerly of Rogers, ND will be 2 pm Friday, September 20, 2013 at Our Savior’s Lutheran Church, Valley City, with Rev. Emmy Swedlund officiating. He died Saturday, September 14, at the Sheyenne Care Center. Visitation will be held an hour prior to the service in the church on Friday. Burial will be in Woodbine Cemetery, Valley City, at a later date. Melbourne Grindler Etzell was born November 6, 1924 on the family farm near Rogers, ND, in Barnes County. He was the son of Raymond and Frieda V. (Grindler) Etzell. His grade school years were spent attending Logan School. In 1943, he graduated from College High. Following graduation, he farmed with his father. On March 20, 1946, he married Elizabeth Rasmussen at her parents’ home in Valley City, ND. The couple moved to the farm where they lived and worked until moving to Valley City in 1959. At that time, he began driving for Aero-Mayflower Moving Company. He did that for 11 years. Melbourne worked for Sammons out of Missoula, MT and then Anderson Trucking out of St. Paul, MN. There he drove truck to Alaska and back for two years. He then worked for Beyers-LaFarge until retiring in 1993. He was a member of the Eagles. Melbourne enjoyed hunting and fishing. He belonged to the Barnes County Wildlife and the Baldhill Rod and Gun Clubs. He was ready to go for a drive around the countryside at any time. He always seemed to have some project he was working on, especially woodworking. One of his greatest joys was his family. He was very proud of all of them. He loved visiting and having company. Melbourne made people smile and laugh until his last day with his terrific sense of humor. Melbourne is survived by his wife, Betty; children, Roger (Loretta) Etzell, Greenville, Ohio, and their children, Sonja Etzell, Elizabeth (Andrew) Murray, and Christopher Etzell; Melody (Larry) Hetland, Valley City, and their children, Darren Hetland, Kristi Hetland, Andrea Hetland; Lynnette (Ed) Kefgen, Seattle, Washington, and her children, Jonathan Wicks and Stefan Wicks; Jolene (Dave) Watanabe, Edmonds, Washington and their children, Steven Watanabe, Christopher Watanabe and Rachel Scout Watanabe; and Leah (Todd) Tangen, Kathryn, North Dakota, and their children, Michael Tangen, Justin Tangen, and Jake Tangen; sister, Vera Lee of Forsyth, MT; in-laws, Ernie (Marilyn) Rasmussen of Chapel Hill, North Carolina; several nieces and nephews. He was preceded in death by his parents. Arrangements have been entrusted to the Oliver-Nathan Funeral Chapel, Valley City.

The family of Melbourne Etzell created this Life Tributes page to make it easy to share your memories.

Send flowers to the Etzell family.