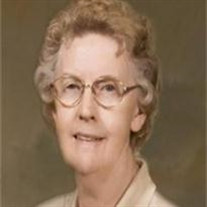 Maybelle Fern Ralston was born in Grand Forks, ND on September 18, 1927 to Arnold V. and Manda (Pede) Ralston. She graduated from East Grand Forks High School in 1945 and immediately started a 13 year work stint with AT&T in Grand Forks. She became a member of the Grand Forks First Methodist Church in her early years and felt a call to serve the “young and fearless prophet of ancient Galilee” in what ever way she could. She sang in the church choir faithfully; taught Sunday school; served on the mission commission of the church, soon becoming its chairperson, and was serving on the registration committee for the Methodist Annual Conference in 1956 when she met Wayne M. McKirdy who had come to the conference for ordination. Maybelle and Wayne were married at Grand Forks on August 24, 1958, and began their team ministry, serving churches in Napoleon/Braddock, Tioga, Edgeley/Jud/Nortonville all in ND, and Black Hills Methodist Camp/Piedmont, Faulkton/Seneca, and Big Stone/Revillo in SD and Wesley Acres Camp in ND. They retired in 1991, buying a home in Valley City, and carried on a retirement ministry in many ways from there. Maybelle was a member of Epworth United Methodist Church in Valley City, where she served as Chairperson for the Outreach committee for many years. No description of her ministry would be complete without mention of her kitchen: Not only her own kitchen that welcomed people in; but the camp kitchens, where she was often cook; and her baking kitchen, as she baked for the community. About 9 years ago Maybelle was stricken with a dementia called Primary Progressive Aphasia, which robbed her of her ability to use words. She became a resident of the Sheyenne Care Center in September 2008, and died at Mercy Hospital in Valley City on September 10, 2009. Maybelle’s joy and most important ministry were her 4 children, all of whom currently live on main street (I-94): Sons: Scott (Colleen) of Dickinson, ND; Stuart (Ellen) of Oregon, WI; Bruce (Lori) of Alexandria, MN; and daughter Donna Mae (Carlos Diaz) of Minneapolis, MN. She is also survived by 6 grandchildren, Grace, Emma, Nicholas, Lucas, Ryan and Ethan, and 2 step grandchildren, Josh Lovseth and Jenny Stensen. A brother Verle Ralston and sister Donna Dahl both of East Grand Forks, MN.

The family of Maybelle McKirdy created this Life Tributes page to make it easy to share your memories.

Send flowers to the McKirdy family.