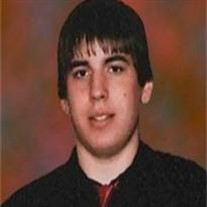 Matthew Mikal Duane Schaefer was lovingly received by his parents, Duane and JoNell (Peterson) Schaefer and his sister, Tiffany on November 21, 1989, in Valley City, ND. As a young child, he was always smiling, laughing, and having fun. Matt loved spending time at the Schaefer family farm and hunting with his Grandpa, Dad, uncles, cousins, and friends. He also enjoyed spending time with his other cousins and friends playing games, driving around, and watching movies. He loved going to the farm to spend time with his two nieces and nephew. They played X-Box, watched scary movies, and jumped on the trampoline. The kids loved when he would show off what he got on his latest hunting expo. He also enjoyed collecting different specimens of spiders (even though he was terrified of them) in jars and showing them to everyone, especially his nieces and nephew. Matt died August 24, 2011. He will always be loved and missed by his parents; sister, Tiffany (Clint) Jewett and their 3 children, Hailey, James, and Adalie, all of Valley City; his grandparents, Orvis and Maxine Peterson of Nome, ND; aunts, Jill (Kermit) Pederson and their daughter, Olivia, Janel (Dave) Salberg and their children, Teresa, Tracy, and Derek; uncles, Randy Peterson, Joel (Renee) Peterson, Michael (Mary) Peterson and their children, Johnathon and Kristen, Daniel Peterson, Brian Schaefer, David (Jean) Schaefer and their children, Jessie (Brock) Grueneich and Jake Schaefer, Joyce Schaefer and her daughter, Laura (Mike Sterling); step-cousins, Matt Pederson and his children, Nathan and Paige and Christopher Pederson and his son, Mason, Matt Havercamp, Alicia (Andy) Kemper and their children, Easton and Mason; and many friends. He was preceded in death by his grandparents, George Jr. and Billie Schaefer; uncle, Doug Schaefer; special great aunts, Esther Johnson and Jo Weber; special cousins, Jan McKay and Don Tahran; great grandparents, Una and Arthur Kennedy, August and Helen Ussatis, Carl and Christine Peterson, and George Sr. and Minnie Schaefer.

Matthew Mikal Duane Schaefer was lovingly received by his parents, Duane and JoNell (Peterson) Schaefer and his sister, Tiffany on November 21, 1989, in Valley City, ND. As a young child, he was always smiling, laughing, and having fun. Matt... View Obituary & Service Information

The family of Matthew Schaefer created this Life Tributes page to make it easy to share your memories.

Matthew Mikal Duane Schaefer was lovingly received by his parents,...

Send flowers to the Schaefer family.