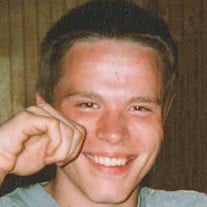 Matthew Hayes Kidd, Jr.31, Valley City, North Dakota, passed away with his mother by his side on November 1, 2017 at Mercy Hospital, Valley City and joined his father in heaven. Matthew was born in Marietta, Ohio on November 27, 1986 to Matthew Hayes Kidd, Sr. and Kelly (Simmons) Kidd. In 1997 they moved to Valley City. He received his GED in 2005. Matthew worked a variety of different construction jobs. He enjoyed writing, reading, bike rides, walks, fishing and anything else that involved the outdoors. The real joys of his life though were his sons, Kaleb Hayes Kidd-McClaflin born August 10, 2007 and Mason Gray Kidd born January 17, 2014. The best days of Matthew’s life were with his boys doing anything or nothing at all. Matthew’s bright blue eyes and mischievous smile gave him a special heartwarming charm and the ability to make anyone laugh. He made friends who became family and he loved his family with all of his heart. Matthew is survived by his two sons, Kaleb Hayes Kidd-McClaflin and Kaleb’s mother, Ashley McClaflin, Valley City and Mason Gray Kidd, Texas and Mason’s mother, Eronna Larocque; his mother, Kelly (Simmons) Kidd, Valley City; a brother, Malkom (Kristin) Kidd, Ohio; a sister, Kacey Rae Kidd, Valley City and numerous aunts, uncles, cousins, and friends who became family. “How lucky was I to have someone who was so hard to say goodbye to.” ……Winnie the Pooh. The memorial service for Matthew will be 2 pm Friday, November 10, 2017 at the Oliver-Nathan Funeral Chapel, Valley City. Visitation will begin at 1 pm Friday. Burial will be in Ohio. Funeral arrangements have been entrusted to the care of the Oliver-Nathan Funeral Chapel. An online guestbook is available at www.oliver-nathanchapel.com

Matthew Hayes Kidd, Jr.31, Valley City, North Dakota, passed away with his mother by his side on November 1, 2017 at Mercy Hospital, Valley City and joined his father in heaven. Matthew was born in Marietta, Ohio on November 27, 1986 to Matthew... View Obituary & Service Information

The family of Matthew Hayes Kidd Jr. created this Life Tributes page to make it easy to share your memories.

Send flowers to the Kidd family.