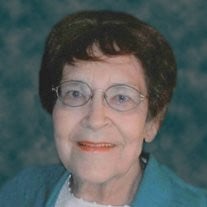 Mary Jane was born February 24, 1938. She was the eldest daughter of L.P. “Pat” Malone and Josephine (Bosch) Malone of Linton, N.D. Mary Jane grew up in Linton where she attended St. Anthony’s Catholic School through grade 8 and Linton High School where she graduated as co-valedictorian. She went on to attend the University of North Dakota where she met the love of her life, Gordon N. Klabo. Mary Jane and Gordon (Gordy) were married at St. Anthony Catholic Church in Linton on June 9, 1958. The couple lived in Bismarck and Parshall, N.D. before settling in Pembina, N.D. where the couple lived until retirement. Mary Jane had a wonderful gift for instrumental and vocal music and honed her musical skills in grade school, high school and college. Throughout her life she played the piano and accompanied dozens of vocal and instrumental musical groups at Pembina High School. Mary Jane passed her musical gifts onto hundreds of children over the years that were warmly welcomed into her home to take piano lessons and the musical gift that Mary Jane directly passed on has undoubtedly been indirectly passed on to future generations. Mary Jane exemplified her love of the Lord by playing the organ for many years at the church that will host her funeral mass. Mary Jane had a large group of friends from various walks of life. For a small community, Pembina had a significant number of new arrivals primarily due to the ports of entry at Pembina and nearby Noyes, MN. Many of the new arrivals had their first local social engagements at the kitchen table of Mary Jane before plates of homemade food or treats and coffee. Mary Jane was the frequent hostess of many of the dear friends that dropped by for hospitality and discourse. Mary Jane truly lived her life in accordance with the second commandment to “love your neighbor as you love yourself”. Among Mary Jane’s proudest accomplishments was bearing and raising four sons all of whom married and went on to raise their own families in North Dakota. The sons, daughters-in-law, and grandchildren are: Michael (Patty Sjoberg), Alexander, N.D. and grandchildren Matthew (Cynthia), Breanna and Shane; Steven (Nancy Roewe), Bismarck, N.D. and grandchildren Zachary and Joseph; Timothy (Pamela Krenz), Antler, N.D. and grandchildren Andrew, Scott, and Crystal; and Mark (Sam Menge), Valley City and grandchildren Madilyn and Connor and four great grandchildren. Mary Jane is survived by the aforementioned as well as her brother James Malone (Judith), Omaha and their children Mary Beth Hendricks and Kelly Green and one sister, Colleen Malone, Mohall, N.D. Among those that met her at the gates of heaven when she passed away on January 28, 2013 are her husband of 52 years Gordy, her parents, Pat and Josephine Malone, paternal and maternal grandparents, as well as many friends and relatives.

Mary Jane was born February 24, 1938. She was the eldest daughter of L.P. “Pat” Malone and Josephine (Bosch) Malone of Linton, N.D. Mary Jane grew up in Linton where she attended St. Anthony’s Catholic School through grade 8 and Linton High... View Obituary & Service Information

The family of Mary Jane Klabo created this Life Tributes page to make it easy to share your memories.

Send flowers to the Klabo family.