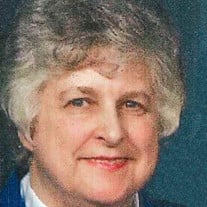 Mary E. Nelson, a very special wife, mother, and great lady, departed this life on August 11, 2016 in the care of Bethany Homes of Fargo at the age of 78. Mary Ernestine Hartfiel was born September 5, 1937 to Walter A. and Minna (Hansen) Hartfiel in St. Paul, Minnesota. Mary attended school there and graduated from Woodrow Wilson High School in 1955. Following high school she was employed at Waldorf Paper Products near her home for about a year. In 1956, she enrolled at Concordia College in Moorhead, Minnesota to pursue a major in business. While in college she met and married Myron Nelson. They were married December 21, 1957 in St. Paul. Myron taught secondary education in North Dakota until moving to Valley City in 1963. Since then they farmed in the Fingal community and lived in Valley City. In 1967, Mary joined the insurance department of American National Bank and later became the insurance manager. In 1989, she opened her own Nelson Insurance Office and later she acquired the Valley City Credit Bureau. After many years she sold her insurance business but retained the credit bureau until she retired in 2013. Mary had many interest besides her businesses, including bowling and gardening. She was a member of the chamber of commerce for many years, serving as president once and was active in the women’s bowling association. She also helped promote junior bowing activities. She acquired many bowling trophies and was inducted into the W.I.B.C. Hall of Fame at the state convention one year. She was awarded the Hi-Line Award by the Valley City Chamber of Commerce. She was the first woman to receive this prestigious award. Mary also served as president of the P.I.A. (Professional Insurance Agents) for one year. She served on the supervisory committee of the First Community Credit Union for a number of years. Later she served on the Board of Directors for several years prior to retiring from business. She had also served on the senior citizens committee and Bridgeview Estates board until her health failed. Mary also had a busy life raising her two sons, Jeffrey and Robert but always seemed to find time to help others. She served as treasurer of her church for many years. She had a strong faith and was a member of St. Paul’s Lutheran Church of Valley City for over 50 years, participating in its choir and helping when and where needed. She was preceded in death by her parents, and her sister, Audrey (Earl) Johnson. Mary is survived by her husband, Myron; sons, Jeffrey (Gail) Nelson and Robert Nelson, all of Valley City; a dear sister-in-law, Dorothy (Norman) Evers, two nieces and one nephew and their families, all of Minnesota. Besides these relatives, she leaves two special friends, Larry Robinson and Linda Holm. The funeral service for Mary will be 11 am Tuesday, August 16 at St. Paul’s Lutheran Church, Valley City. Visitation will be 5 to 7 pm Monday at the church and will continue one hour before the service at the church. Funeral arrangements have been entrusted to the care of the Oliver-Nathan Funeral Chapel, Valley City. An online guestbook is available at www.oliver-nathanchapel.com

Mary E. Nelson, a very special wife, mother, and great lady, departed this life on August 11, 2016 in the care of Bethany Homes of Fargo at the age of 78. Mary Ernestine Hartfiel was born September 5, 1937 to Walter A. and Minna (Hansen) Hartfiel... View Obituary & Service Information

The family of Mary E. Nelson created this Life Tributes page to make it easy to share your memories.