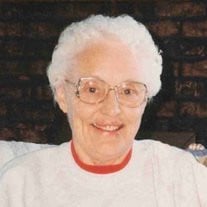 Marline Emma Nelson was born November 19, 1929 in Valley City, ND, the daughter of Albert and Anna (Greif) Nelson. She graduated from Valley City High School with the class of 1947. Marline enlisted in the US Army in April 1951. She served for a time as a telephone operator in Japan. In 1954, she was honorably discharged with the rank of Sergeant. She also worked as a telephone operator with the Northwestern Bell Telephone Company in Valley City. On February 5, 1956, she was united in marriage to Earl Priebe. This union produced three children: Susan, Steven & Diane. The family moved to Bismarck, ND in 1965 when Earl was transferred by the Northwestern Bell Telephone Company, where he worked as a construction foreman. Marline’s time in Bismarck was filled with being a full time loving wife and mother, raising her children, sewing clothes and crafts, and visiting with special neighbors. She was constantly baking with plenty of goodies to always be found. When Earl retired from the phone company in 1977, they returned to the Valley City area where she became a farm wife. Earl purchased his family farm 9 miles NE of Valley City. Marline kept herself busy there refinishing all the old woodwork in the farmhouse. She continued sewing crafts and clothes and visiting neighbors. Earl and Marline moved back to Valley City in 1992 when Earl started having health problems. A few years later, they were lovingly cared for by their daughter, Diane. Marline so enjoyed visiting with old friends and new ones as well as relatives. She was especially fond of the time spent with her granddaughters, Katharine and Emily. She moved into the Sheyenne Care Center in September 2011 where she made many more friends with both residents and the caring staff members. She died there, with her son and daughter-in-law by her side, on March 31, 2013, at the age of 83. Marline is survived by her children, Susan (Elroy) Kadrmas of Bismarck and Steven (Lynn) Priebe of Valley City; granddaughters, Katharine and Emily Kadrmas of Bismarck; sisters-in-law, Shirley Nelson of Valley City, Fran Nelson of Bismarck, Gladys Ratzlaff of Valley City, Mary Jane Anderson of Edgeley, ND, Ruth (Walt) Kerbaugh of Cooperstown, ND, Annabelle Reichert of Lone Star, TX, and Nancy Deutscher of Moorhead, MN. She was preceded in death by her husband, Earl; daughter, Diane; parents, Albert and Anna; mother and father-in-law, Frederick and Viola (Beil) Priebe; brothers, Raymond, Russel, Earling, and Stanley; and numerous other relatives.

Marline Emma Nelson was born November 19, 1929 in Valley City, ND, the daughter of Albert and Anna (Greif) Nelson. She graduated from Valley City High School with the class of 1947. Marline enlisted in the US Army in April 1951. She served... View Obituary & Service Information

The family of Marline Priebe created this Life Tributes page to make it easy to share your memories.

Send flowers to the Priebe family.