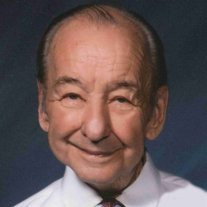 The funeral service for Marlin Oberg, 82, Valley City, ND will be 10:30 a.m., Friday, August 2, 2013 at Our Savior’s Lutheran Church, Valley City. Burial with military honors will be in Woodbine Cemetery, Valley City. Visitation will be from 4:00 p.m. until 7:00 p.m. on Thursday at the Oliver-Nathan Funeral Chapel, Valley City. It will continue an hour prior to the service at the church on Friday. Marlin Donald Oberg was born July 16, 1931 in Fargo, ND, to Gudmund and Myrtle (Carlson) Oberg. He grew up on the family farm near Kragnes, MN. Marlin graduated from Moorhead High School in 1949. He served in the US Army during the Korean Conflict. Upon his return from service, he attended business college in Moorhead. On June 10, 1956, he married Lucille Larson in Wilton, ND. They made their home in Valley City, ND. In 1963, he became Deputy Sheriff of Barnes County. He was the manager of the Valley City Chamber of Commerce and then was an agent with American Family Insurance. Before health issues caused his retirement, he worked for Electrical Builders. Lucille died April 28, 1985. On September 7, 1995, he married Jeanette Larson Bevins in Valley City, where they continued to make their home. Marlin was a member of Our Savior’s Lutheran Church in Valley City, where he served on the church council and ushered. He also belonged to the Elks, Eagles, VFW, and American Legion. He served his community by being on the city commission and as Registrar of Deeds. He loved dancing, especially the waltz. He was a great cook. Pinochle was his card game of choice. He kept informed of current events by watching the news and liked to talk politics. He also enjoyed his summers at Cotton Lake, MN. Marlin died at St. Mary’s Hospital in Detroit Lakes, MN on July 30, 2013. He is survived by his wife, Jeanette of Valley City; two daughters, Jane (Tony) Diemert and Lori (Terry) Justesen both of Valley City; grandchildren, Aaron and Alyssa Tait, Trevor, Tiffannie, and Tarryn Justesen; a step-daughter, Diane Bevins of Fargo, ND; a step-son, Terry Bevins of Fargo; two brothers, Elmer Oberg and Ernie (Wilma Jean) Oberg both of Moorhead, MN; and a sister, Joan (Duane) Erickson of Moorhead. He was preceded in death by his parents; wife, Lucille; son, Scott; grandson, Jared; granddaughter, Jenna; step-son, Tom Bevins; 3 brothers; and 2 sisters. Arrangements have been entrusted to Oliver-Nathan Funeral Chapel, Valley City. An online guestbook is available at www.oliver-nathanchapel.com

The family of Marlin Oberg created this Life Tributes page to make it easy to share your memories.

The funeral service for Marlin Oberg, 82, Valley City, ND will...

Send flowers to the Oberg family.