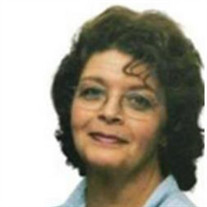 Marjorie (Marge) Faul, 74, Valley City, North Dakota passed away Thursday, January 20, 2022 at Sanford on Broadway, Fargo, North Dakota. Marjorie Ann Dietrich was born May 20, 1947 in Verona, North Dakota, the daughter of Arthur and Bernice (Laney) Dietrich. She attended school in Verona. Marge married Curtis Faul in October 1968 in Fargo, North Dakota at the First Lutheran Church. She worked at the Fargo Foundry until her and Curt moved to Valley City. Curt and Marge attended First Baptist Church. Pastor Curtis Haus called on the Faul’s and presented the gospel message. It was at that time Marge and Curt gave their hearts to Jesus Christ in service to him. They both became members of the First Baptist church. Marge was an avid Awana leader and Sunday school teacher. In 1970 Marge and Curt moved into a house in Lake Shore Acres and she made it their home for five years. At which time they bought a farm place west of Valley City. Marjorie started with 88 angora goats that flourished into 550. In 1994, she sold the goats and they moved back into Valley City where she and Curt remodeled their home. Marge did daycare and enjoyed taking care of the children. When her health started to fail she stayed home and was a prayer warrior for her family, grandchildren, friends, and neighbors. Marge and Curt raised three children Matthew (Lisa), Fargo, Adam (Melissa), Valley City, and Sara Faul Maley, Valley City. Their grandchildren include Brianna Faul, Jakob and Madison Maley, Grace Hanneman, John Coombs, Cody and Carson Abrahamson, and Mary Jungels. Marge also enjoyed talking to her brothers and sister: Robert (Shirley) Dietrich, Verona ND, Diane Ponto (Ralph), Arizona, and Fred (Leanne) Dietrich, Florida. Marge was preceded in death by her mom and dad and her big brother Richard Dietrich. There will be only a graveside service in the spring in Verona, North Dakota. Funeral arrangements have been entrusted to the care of Oliver-Nathan Funeral Chapel, Valley City. An online guestbook is available at olivernathanchapel.com

The family of Marjorie Ann Faul created this Life Tributes page to make it easy to share your memories.

Send flowers to the Faul family.