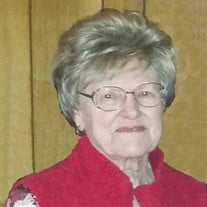 The funeral service for Marilyn Joann Sather, 83, Valley City, North Dakota, will be 2 pm Friday, May 12, 2017 at Our Savior's Lutheran Church, Valley City. Visitation will be 5-7 pm Thursday at the Oliver-Nathan Funeral Chapel, Valley City, with a prayer service at 7 pm in the chapel. Visitation will continue one hour before the service at the church. Burial will be in Memory Gardens, Valley City. Marilyn JoAnn Paulson was born December 23, 1933 to Howard and Duva (Mienecke) Paulson at Edgeley, North Dakota. She grew up at Adrian, North Dakota and graduated from LaMoure (ND) High School. After graduating she attended Valley City State College in Valley City. Marilyn was united in marriage to Clayton Sather on December 15, 1955. They made their home in Valley City until April 1974 when they moved to their farm near Litchville, North Dakota. In 2009, they moved back into Valley City. She started working as a bookkeeper in 1952 and did so for 65 years. She was a valued employee of Carlisle Company, Hill Oil, Vining Oil Company, John’s I-94 and Petro Serve USA. She loved being a bookkeeper. She was a member of Our Savior’s Lutheran Church and the “51” Birthday Club where she had many dear friends. She loved reading, sewing, cross-stich, and coffee with friends. Most of all, she loved her family and enjoyed spending time with them. She is survived by her loving husband of 61 years, Clayton Sather, two sons, Steven (Candace Lukes) and Dale (Colleen) Sather, one daughter, Julie Opatz (Brian Himmerick) all of Valley City. Five grandchildren, David Sather (Ashley Dahl), Valley City, Tina (Rick) Bentley, Fargo, ND, Mara Sather (Andrew Stylte), Williston, ND and Candace Opatz (Brandon Jund), Bismarck, ND, a step-grandson, Lance Lukes, Valley City and three great-grandchildren, Abby and Ella Sather, Valley City and Huntyr Bentley, Dilworth, MN. She was preceded in death by infant twins – a daughter, Donna Sather and son, David Sather, her parents, four sisters, two brother-in-laws, one sister-in-law, and mother and father-in-law Oscar and Clara Sather. Marilyn died May 7, 2017 in Fargo. Funeral arrangements for Marilyn have been entrusted to the care of the Oliver-Nathan Funeral Chapel. An online guestbook is available at www.oliver-nathanchapel.com

The family of Marilyn Joann Sather created this Life Tributes page to make it easy to share your memories.

Send flowers to the Sather family.