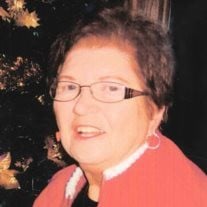 The funeral service for Marian Gerntholz, 76, Valley City, ND, will be 2:00 PM, Monday, March 17, 2014 at Our Savior’s Lutheran Church, Valley City. Burial will be in Fairview Cemetery, Sanborn, ND. Visitation will be held at Our Savior’s Lutheran Church, Valley City on Sunday from 4:00 PM until 7:00 PM. A prayer service will be held there beginning at 7:00. Marian Joyce Huether was born August 4, 1937 to William and Rosella (Mathias) Huether in Lisbon, ND. She grew up on the family farm near Elliott, ND, attended grade school there and graduated from Lisbon, ND, High School in 1955. She attended Concordia College, Moorhead, MN for one year, and graduated from NDSU in 1959 with a Bachelor of Science Degree in Home Economics and minors in Related Arts and Science. She lived to learn, taking various classes at VCSU through the years. Marian was united in marriage to Gereld “Gerry” Gerntholz on June 28, 1959 at Our Redeemer Lutheran Church in Lisbon, ND. They made their home near Sanborn, ND, where they farmed until 1999, when they moved into Valley City, ND. She was a people person, not many persons lived in Barnes or Ransom County that she didn’t know or know of. But family was number one – school activities such as concerts, football and basketball games, and track meets were fun, but holiday get-togethers and birthday parties were her favorite thing. She loved the farm and the work involved in it and was active in church, school and community activities besides. Marian was organist at Our Redeemer Lutheran Church in Lisbon during her high school years and organist at Bethel Lutheran in Rogers, ND for many years as well as council member, Sunday school teacher and WELCA member and officer. She was president of Women of the ALCW Jamestown Conference 4 years and attended several national conventions. Marian substitute taught at several Barnes County schools and totally enjoyed the young people. She was a 4H Leader for 21 years, taught several classes for the Barnes County Extension office, and organized and judged “Make it With Wool” contests, and judged 4H events in several adjacent counties. Marian was an Anderson Homemakers Club member since 1959, but the North Dakota Winter Show Women’s Board and its activities was her thing for about 50 years. The first part of March was her favorite time of year. She was honored by the North Dakota Association of Fairs as Fair Person of the Year in 2011. Other community activities she was involved in included serving on the Mercy Hospital Advisory Board, V-500 Board, the Sheyenne Care Center Board and District 24 Republican Party. Besides farming with Gerry, she was also his legislative campaign manager and made sure everything was shipshape when he was gone with National Guard and legislative activities. Marian died March 13, 2014 at home in Valley City after a valiant, yearlong battle with pancreatic cancer that claimed her body but not her spirit. She is survived by her husband, Gerry; her children and grandchildren, Greg and Judy Gerntholz, Sanborn and their family, Katherine and William; Beth and Dana Didier, Eckelson, and their family, Daniel Wieland, Luke Wieland, Blake Didier and Bryn Didier; Steve and Tamie Gerntholz, Sanborn, and their family, Logan, Cole, and Riley. She is also survived by her mother, Rose Mekvold, Lisbon, ND; a sister, Janice and Grover Riebe, Gwinner, ND; and a brother, William, Nisswa, MN; sisters-in-law, Joyce Huether, Lisbon, ND, Judy Huether, Fargo, ND, and Marsha Huether, Savage, MN; and many nieces, nephews, and cousins whom she dearly loved. She was preceded in death by a son, Jon David; son-in-law, Thomas Wieland, Jr.; father, William R. Huether; brothers, Richard Huether, David Huether, and an infant brother, Howard Huether. Funeral arrangements for Marian have been entrusted to Oliver-Nathan Funeral Chapel, Valley City. An online guestbook is available at www.oliver-nathanchapel.com

The family of Marian Gerntholz created this Life Tributes page to make it easy to share your memories.

Send flowers to the Gerntholz family.