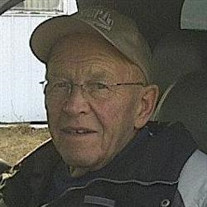 Lyle Pedersen was born March 30, 1943 in Valley City, North Dakota, the son of Vernon and Margaret Pedersen. He grew up in Valley City and graduated from Valley City High School in 1961. Lyle attended college at Wahpeton State School of Science and Valley City State University. He served in the United States Air Force for three years in Germany with the 17th Air Force. He married Karen Olson in 1968 and they raised four children. Lyle worked in heating and air conditioning and farmed for 13 years. When he stopped his favorite careers he went to work for Don’s FM Oil Company, Fargo, later becoming general manager. Lyle enjoyed hunting and fishing along with the love for nature. He loved his family very much. He had served on church board, township board, hospital board and was a member of the Eagles Club and Lions Club. He is survived by Karen; his two daughters, Denelle (Shawn) Carrier of Cavalier, ND and Jill Pedersen of Fargo, ND; a son, Eric Pedersen of Fargo, ND; two brothers, Wayne (Shannon) Pedersen of Slayton, MN and Ron (Connie) Pedersen of Bismarck, ND; and 9 grandchildren, Dustin, Hunter, Cheyenne, Dawson, Ashden, Whitley, Andre, Eden, and Boone. Lyle was preceded in death by his parents and his son, Darin Pedersen. The funeral service for Lyle will be held at the Oliver-Nathan Funeral Chapel, Valley City, ND on Saturday, November 22, 2014 at 10:30 AM. Visitation will be held beginning an hour prior to the service. Burial will be in Woodbine Cemetery, Valley City. Oliver-Nathan Funeral Chapel of Valley City has been entrusted with handling the arrangements for Lyle. An online guestbook is available at www.oliver-nathanchapel.com

The family of Lyle Pedersen created this Life Tributes page to make it easy to share your memories.

Send flowers to the Pedersen family.