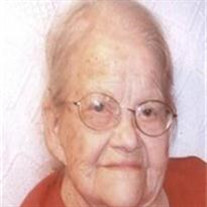 Lydia Pearl Bowman, aged 91, Valley City, North Dakota, went home to be with her Lord & Savior on Mother’s Day, Sunday May 10th, 2009 at the Sheyenne Care Center, Valley City. Pearl was born on the Wagar family homestead near Inkster, ND on November 25, 1917, the fifth of six children born to Fred and Lillie Wagar, and attended Inkster Public Schools through the eighth grade. She married Byron Bowman on September 26, 1942 in Valley City, ND and in 1949 they adopted their daughter Eunice. Aunt Pearl, as she was known by nearly everyone, had a servant’s heart and was happiest when “doing for others”. She worked for a time at Bloom’s Bakery in Valley City, as a housekeeper for several Valley City families, served as head cook at Storybook Lodge Bible Camp near Biwabik, Minnesota for over 20 years, and later at the Tewksbury Ranch Bible Camp near Hurdsfield, ND for more than 10 years. But her biggest joy in life came from being homemaker to Byron and Eunice. Pearl loved her Lord, loved her family, loved her friends and loved to bake. No Church or family gathering was complete without a representative sampling of Aunt Pearl’s pies, and rarely would you visit her home without being treated to something sweet, hot, and fresh out of the oven. Pearl was preceded in death by her parents, Fred & Lillie Wagar, her husband, Byron Bowman, a sister Vanetta Murphy, and four brothers, Eldon, Ray, Elmer, and Harry. She is survived by her daughter Eunice (John) Herro of Denver, Colorado, and dozens of nieces and nephews, both biological and honorary.

The family of Lydia Pearl Bowman created this Life Tributes page to make it easy to share your memories.

Send flowers to the Bowman family.