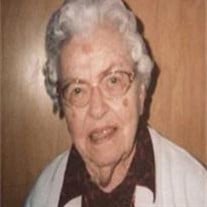 Lucille Geneva Thomson was born December 17, 1912 in Hope, ND to James and Orabell (Knoblock) Thomson. They lived in Luverne, ND where she was raised and graduated from Luverne High School. She worked in the Luverne Telephone Office. Lucille was united in marriage to Arthur D. Jacobsen on January 31, 1931. They farmed on the Bob Saunders farm west of Hope. In 1932, they moved to the Ras Jacobsen farm in Willow Lake near Luverne until October of 1966 when they retired and moved to Hope. They spent many winters in Mesa, AZ. They owned and ran the café in Luverne. Lucille enjoyed traveling and visited many relatives and friends along the way. They took many trips including Denmark, Scotland, and they even drove to Alaska. She was a member and was very active in Luverne Lutheran Church where she held many offices in Ladies Aide. She was Superintendent of Sunday School and taught many children. She was a 4-H Leader for several years and was a member of the Danish Sisterhood. Lucille enjoyed sporting events with children and grandchildren. Her deep love of home and family was apparent every day of her life. She is survived by three daughters, Dolores Leadbetter of Luverne, Joyce (Jack) Germundson of Mayville, ND, and Jeneva Burchill of Page, ND; 18 grandchildren; 53 great grandchildren; 26 great great grandchildren; a brother, Roy (Evelyn) Thomson of Oakdale, MN; and a sister, Luella Strathe of Ottawa, KS. She was preceded in death by her parents; husband; daughter, Donna Strathe; 4 brothers, Clyde, Harry, Bernard, and James Thomson; 2 sons-in-law, Raymond Leadbetter and Maynard Burchill; a grandson, John Germundson; and a great great grandson, Kaden Schlotfeldt.

Lucille Geneva Thomson was born December 17, 1912 in Hope, ND to James and Orabell (Knoblock) Thomson. They lived in Luverne, ND where she was raised and graduated from Luverne High School. She worked in the Luverne Telephone Office.... View Obituary & Service Information

The family of Lucille Jacobsen created this Life Tributes page to make it easy to share your memories.

Send flowers to the Jacobsen family.