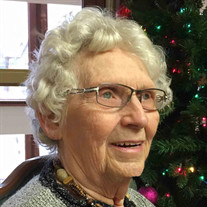 Louise Anderson, a longtime resident of Sanborn, ND and most recently Arden Hills MN, passed away peacefully in her sleep February 14. She was 90 years old. Louise was born to Alfred “Spot” and Helen (Spencer) Ellison, March 31, 1926 in Fargo, ND. After graduating from Sanborn High School, she travelled with her good friends Elaine McCormick and Harriet Hinschberger to Tacoma, Washington where they worked in a factory to support the World War II effort until the war ended. She returned to North Dakota and attended Valley City State College until she married Leonard “Bud” Anderson in 1946. They worked at the Anderson family farm near Valley City and soon became a family with sons Gary and Larry. In 1948 Louise and Bud moved to Sanborn, where Bud took over operation of Ellison Hardware, the Ellison family business. Daughters, Sharee and Mary, were born next. While raising her children, Louise also was very active in school events, gardening, music and the Eastern Star Organization. Often when the school band had concerts, she would provide piano accompaniment for soloists. She also enjoyed singing at any time, in many places, with her special friends Ethel Pikey and Betty Koebernick. During the 1950’s, Louise and Bud helped establish the Sanborn bowling alley and café. Later Louise helped in running the café and became well known for her wonderful baked goods, especially bismarcks and gigantic cinnamon rolls. During the 1960s Louise handled secretarial and administrative work at Valley City State College. It was also during this time that Louise began to expand her flower gardens and was very active in Garden Club activities winning many ribbons and awards. Starting in the 1970s Louise worked for Social Services in Jamestown and continued working well into her 70’s because she liked her job. Downsizing in 2010, Louise and Bud moved to Valley City. In October, 2013 they relocated to Arden Hills, MN. She is survived by four children; Gary and wife Chris of White Bear Township, MN, Larry and wife Chris of Mesa, AZ, Sharee Berntson and husband, Jim of Sanborn and Mary (Mim) Stoudt and husband Jamie of Stillwater, MN: seven grandchildren and eight great-grandchildren. She was pre-deceased by her parents and husband. Services will be held at the Congregational United Church of Christ, Valley City at 10:30 AM. Saturday, February 18. Visitation will be one hour before the service at the church. Lunch to follow. Memorials may be made in Louise’s honor to any Alzheimer Disease Research center of your choice. Funeral arrangements have been entrusted to the Oliver-Nathan Chapel Funeral Home in Valley City, ND. An online guestbook for Louise is available at www.oliver-nathanchapel.com

Louise Anderson, a longtime resident of Sanborn, ND and most recently Arden Hills MN, passed away peacefully in her sleep February 14. She was 90 years old. Louise was born to Alfred &#8220;Spot&#8221; and Helen (Spencer) Ellison, March 31,... View Obituary & Service Information

The family of Louise Anderson created this Life Tributes page to make it easy to share your memories.

Louise Anderson, a longtime resident of Sanborn, ND and most...