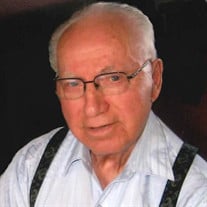 The funeral service for Lloyd E. Schmidt, 96, Valley City, North Dakota will be 10:30 am Saturday, April 8, 2017, at Our Savior&#8217;s Lutheran Church, Valley City. Visitation will be one hour before the service at the church. Burial will... View Obituary & Service Information

The family of Lloyd E. Schmidt created this Life Tributes page to make it easy to share your memories.

Send flowers to the Schmidt family.