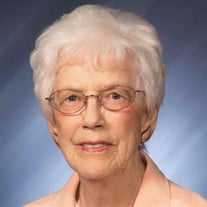 Lillian Jacobson, 95, Valley City, ND, died Sunday, April 19 in Mercy Hospital. She was born on August 23, 1919 on the family farm near Fingal, ND. She was the 11th child born to Halvor P. and Ida (Maasjo) Langemo. She completed eight grades in a one room rural country school in 7 years. Lillian graduated from Valley City High School as a valedictorian of her class. She attended Valley City State Teachers College majoring in English with minors in Biology and Library Science, being the first in her family to earn a baccalaureate degree. Over a period of forty years she held library positions in several schools and colleges in ND, OR, MN and IL. Within a few months at her new position at Valley City State, she met John Jacobson. They dated rather regularly, and in a few months decided to marry on February 1, 1957 at Our Savior’s Church in Valley City. In 1980 both Lillian and John retired and spent 19 winters in Arizona, plus twice traveled to Norway and Sweden. John passed away on January 7, 2005. Lillian remained loyal to Our Savior’s Lutheran Church being active in WELCA, Circles and Archives committee. She has been part of V500 at Valley City State University since its inception. In 2007, she was recognized with the VCSU Alumni Service Award. Lil was a 50 plus year member of Delta Kappa Gamma and American Library Association. She never forgot a birthday and was always interested in her extended family’s lives. Lillian is survived by a sister, Ruth Steen of Fargo, and a brother, Howard of Valley City; and several nieces and nephews. She was preceded in death by her husband, John; her parents; 11 brothers and sisters. The funeral service for Lillian will be 1:30 PM, Thursday, April 23, 2015 at Our Saviors Lutheran Church, Valley City. Visitation will be held at the church prior to the funeral Thursday, beginning at 10:00 AM. Burial will be in Hillside Cemetery, Valley City. Memorials are encouraged to be given to Our Savior’s Lutheran Church, Valley City, Valley City State University, or the giver’s choice. The Oliver-Nathan Funeral Chapel has been entrusted with handling arrangements for Lillian’s service. Please visit www.oliver-nathanchapel.com to sign the online guestbook and leave a message for the family.

The family of Lillian Jacobson created this Life Tributes page to make it easy to share your memories.

Send flowers to the Jacobson family.