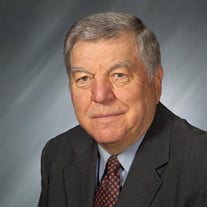 Leslie D. Breitbach, 87, Fargo, North Dakota formerly of Valley City, North Dakota passed away Wednesday, October 16, 2019 at Bethany on University. Leslie Daniel Breitbach was born January 13, 1932 in Luverne, North Dakota, the son of Sylvester and Sophia (Jacobsen) Breitbach. He attended and graduated from Luverne high school in 1950. He farmed for a while and worked for the railroad until going to basic training on his 21st birthday. He served in the Korean War for eleven months. After his discharge he attended NDSU and graduated with an Agronomy degree. He worked for Production Credit Association (PCA) in LaMoure. Les was united in marriage to Phyllis Frahm on August 20, 1960 in Wimbledon, North Dakota. They moved and worked in St. Paul, Minnesota where their two children Jane and Mark were born. The family moved to Fargo in 1964 where he continued work with PCA. In 1967, they moved to Valley City where he began working for American National Bank as an Ag lender. The bank went though several ownership changes while he worked there including Northwestern Bank, Norwest Bank and Wells Fargo Bank. He retired in 1986. Les then began working with Wells Fargo Insurance until retiring again in 1997. Phyllis passed away July 25, 2015. Les was an avid NDSU Bison football fan. He has had season tickets for almost 50 years. He enjoyed grooming his lawn and his flower gardens. Les and his son, Mark also attended many of the Valley City State University basketball games and wrestling matches. He was an important part of organizing the judging and display of grain samples at the ND Winter Show with over 20 years of involvement and he was the 2008 Crop Show Honoree. Les was involved in many organizations including the American Legion, Eagles, Elks, Kiwanis, VFW and Barnes County Wildlife. He was a member of the Board of Directors for the Senior Center and a board member for Job Corps. He also served many years on the Valley City School Board and his signature is on both his children's high school diplomas. He is survived by his son Mark, Fargo; daughter Jane Ann (Jeff) Anderson, Fargo; four grandchildren, Matthew (Kris) Breitbach, David Breitbach, Emily Breitbach and Brandon (Chrissy) Berg; three great grandchildren; brothers Dwain (Phil) Breitbach, John (Marianne) Breitbach, Nick (Barb) Breitbach; sisters Mary (Doug) Campbell and Karen (Kevin) Martindale. Les was preceded in death by his parents; wife Phyllis; a sister Marcella; and a brother Joseph. Blessed is the memory of Les, as now he is dancing with his favorite dance partner, Phyllis, in heaven. Visitation for Les will be 5-7 pm Sunday, October 20, 2019, at Epworth United Methodist Church, Valley City, followed by a prayer service at 7 pm. Visitation will continue one hour prior to the service at 10:30 am Monday, October 21 at the church. Burial will be in Memory Gardens, Valley City. Funeral arrangements have been entrusted to the care of the Oliver-Nathan Funeral Chapel, Valley City. An online guestbook is available at www.oliver-nathanchapel.com

The family of Leslie "Les" Breitbach created this Life Tributes page to make it easy to share your memories.

Send flowers to the Breitbach family.