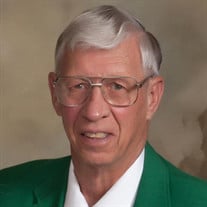 LeRoy Walter Schierkolk, of Valley City, ND, passed into the arms of his Savior Jesus Christ on December 1, 2020 at the age of 82. He was born in Steele City, NE on August 12, 1938 to Walter and Dorothy Schierkolk, the second of five children. He graduated from Powell High School in Powell, WY in 1956 and then attended Northwest Community College in Powell where he received his Associate Degree before joining the United States Army in January of 1959. After training stints in Texas and California, he was stationed in Korea until he was honorably discharged in December 1960 with the rank of Sergeant E-5. Right after his discharge he returned home, attended the Christmas Eve service at church, and spotted Kathleen Brodle, the Sunday school teacher that one day would become his wife. It still took his brother's encouragement and Kathleen's sister shoving her into his arms at the ice skating rink before he worked up the courage to ask her out on a date, but she had seen him in his Army dress uniform at the Christmas Eve service and was very interested in going on that first date. A year and a half later on August 24, 1962 they were married in Riverton, WY and celebrated their 58th anniversary this year. Lee continued his education at Emporia State College in Emporia, KS graduating with his Bachelor of Science in Education degree in 1964. He started his teaching career at Washington High School in Washington, KS then moved to Hillcrest High School in Cuba, KS before he decided to get his Master of Science in Education degree at Chadron State College in Chadron, NE where he graduated in 1970. That year he moved his wife and three boys to Boise, ID where he started working at South Jr. High School as a Physical Education and Mathematics instructor and filled the role of Athletic Director for the school. While in Boise, they added twin daughters to the family. After ten years in Boise, Lee and Kathleen made the decision to move to Prairie Farm, WI. Lee accepted a teaching position at Prairie Farm High School in 1980 and remained there until he retired from teaching in 2001. Lee enjoyed hunting and reading, but his passion was coaching. He loved the kids he worked with and cherished the relationships that were built through the years. He started his coaching career with Jr. Legion baseball in Riverton, WY leading his teams to three District Championships and three State Tournament appearances. He coached volleyball, track, football and wrestling, but his greatest joy was coaching baseball. Even after retiring from teaching at Prairie Farm High School, Lee continued to coach the baseball team for another seven years. In his 27 - year tenure at Prairie Farm he led his teams to 11 conference titles, 6 regional titles and the sectional title and state tournament in 2001. He led the effort to build a new baseball diamond at the high school and was honored by having the field named after him. In 2008, Lee and Kathleen moved to Valley City, ND to be with his daughters and their families. He filled his retirement with substitute teaching, refereeing games, and watching his grandchildren in all their events until he was physically unable to continue. Throughout his life, it was Lee's faith that motivated what he did and how he went about doing it. He was very active in the various churches that he attended, a prolific supporter of various ministries and he was an example to his family and many others. He wanted his life to point to Jesus so that others might know of Jesus' love for them. Lee is survived by his wife Kathleen, his brother Delbert Schierkolk of Torrington, WY, his sister Barbara (Ron) Pederson of Vernal, UT sister-in-law Linda Schierkolk of Highlands Ranch, CO; his sons Todd (Barb) Schierkolk of Jerez, Mexico, Tom (Linda) Schierkolk of Eben Junction, MI, Scott (Tamara) Schierkolk of Minneapolis, MN; his daughters Katrina (Jeremy) Zeltinger and Kristin (Brent) Peterson of Valley City; grandchildren Rachel (Ben) Davis, Megan (Josh) Hedstrom, Kirstie (Seth) Skogerboe, Lydia (Ekagra) Agarwal, Sam (Sarah) Schierkolk, Logan (Amanda) Schierkolk, Silas Schierkolk, Inga Schierkolk, Thora Schierkolk, Olga Schierkolk, Ethan (Grace) Zeltinger, Luther (Bobbi Jo) Zeltinger, Rose Zeltinger, Seth Zeltinger, Caleb Peterson, Rebekah Peterson, Hannah Peterson, David Peterson, Abigail Peterson, Faith Peterson, great-grandchildren Mairead and Shepherd Hedstrom. He was preceded in death by his parents Walter and Dorothy Schierkolk, sister Martha Urbanski, brother Richard Schierkolk, sister-in-law Mary Schierkolk, and nephews Tim Schierkolk and Kenneth Schierkolk. Visitation will be noon to 2 pm Tuesday, December 8 at Grace Free Lutheran Church, Valley City followed by the funeral service at 2 pm at the church. Burial will be at Hillside Cemetery, rural Valley City. We will livestream the service from is https://www.gracefree.com/watch-online Funeral arrangements have been entrusted to the care of the Oliver-Nathan Funeral Chapel, Valley City. An online guestbook is available at www.oliver-nathanchapel.com

LeRoy Walter Schierkolk, of Valley City, ND, passed into the arms of his Savior Jesus Christ on December 1, 2020 at the age of 82. He was born in Steele City, NE on August 12, 1938 to Walter and Dorothy Schierkolk, the second of five children.... View Obituary & Service Information

The family of LeRoy Walter Schierkolk created this Life Tributes page to make it easy to share your memories.

LeRoy Walter Schierkolk, of Valley City, ND, passed into the...

Send flowers to the Schierkolk family.