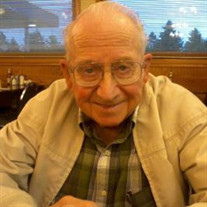 Leonard Eldon “Bud” Johnson passed away on February 26, 2016, at his home, surrounded by family under the care of hospice. He was born in Valley City, ND at Mercy Hospital on September 10, 1930 to Leonard and Emelia “Peggy” Johnson. He was baptized at Ringsaker Church in Skandia Township and confirmed in Hastings’ Lutheran Church. He lived his whole life on his parents’ farm in Skandia Township. Growing up, he attended a one room country school house through eighth grade. He then graduated from College High in Valley City and finished his schooling at a trade school in Fargo. Upon finishing trade school in the spring of 1950, he married the love of his life, Beverly, and entered into a farming partnership with his father and best friend. Eldon only loved two things more than farming: God and his family. Eldon made community, family, and God his everything through his acts of service. It was a common sight to see Eldon ushering in church on Sundays, and he would give a strong handshake and smile to everyone he greeted. He served on three separate school boards: Brown School, Hastings School, and Kathryn School, and helped start the Valley City Vocational Center which served students from six area schools. He also served on the Skandia Township, church, and cemetery boards, and was the Ringsaker Cemetery sexton for 56 years. Although these are great accomplishments, nothing compares to his 66 year marriage to his wife, Beverly. He was a very hardworking, caring, and strong man, who was sought out among friends and family as a personal confidant and counselor. His spunk, dry spitfire sense of humor, quiet humbleness and devout faith remained strong through his 20 year battle with Parkinson’s disease. He never hesitated to help a stranger or someone in need, and even up to his final days, he never ceased to place his friends and family’s well-being before his own. He was a spark of life and steadfast glue in a family that will miss him every day, forever. Eldon now rests in peace with his mom, dad, sister, and daughter, Kathleen. He is survived by his wife, Beverly; brother: Leroy (Inez) Johnson; two sons: David Johnson and Scott (Shari) Johnson; five grandchildren: Jennifer Cabezas, Andrea (Camron) Atkinson, Amanda Johnson, Alyssa (Richard) Wright, and Cody Johnson; and five great-grandchildren: Noah, Ethan, and Shelby Cabezas, and Ava and Shawn Atkinson, numerous extended family, neighbors, friends, and farming buddies that were like family. The prayer service will be at 6 pm on Tuesday, March 1, with visitation hours from 4-7 pm at Oliver-Nathan Funeral Chapel in Valley City, ND. The funeral will be in Valley City at 11 am Wednesday, March 2 at Our Saviors Lutheran Church. Following the service and fellowship, interment will take place at Ringsaker Cemetery.

The family of Leonard Eldon "Bud" Johnson created this Life Tributes page to make it easy to share your memories.