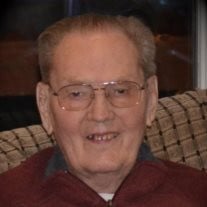 Leonard “Bud” Anderson, a long time resident of Sanborn, ND, passed away peacefully in his sleep, March 1, 2014 in Arden Hills, MN. He was 86 years old. Bud was born to Severt and Lenora (Larson) Anderson, July 30, 1927 in Valley City, ND. He attended Hobart Township School and College High in Valley City. In 1946, he married Louise Ellison and worked at the family farm near Valley City. In 1948, Bud and Louise moved to Sanborn, ND, where they took over operation of Ellison Hardware, the Ellison family business. Bud operated the hardware store for 60 years, adding plumbing and heating, excavating, propane, and swimming pool sales to the operation over the years. He retired in 2008 at the age of 81. He and Louise moved to Valley City in 2010. Following a hip fracture in October, 2013, they relocated to Arden Hills, MN. Bud was active in the Sanborn community. He was a member of the city’s Civic Club and Town Board, serving as mayor for nearly 20 years. He was also a member of the Sanborn Fire Department for 60 years, and was an avid bowler at Sanborn Area Lanes. He loved family, community and school sporting events, boating and water skiing. He is survived by his wife, Louise; four children, Gary (Chris) of White Bear Lake, MN, Larry (Chris) of Mesa, AZ, Sharee (Jim) Berntson of Sanborn, and Mary “Mim” (Jamie) Stoudt of Lake Elmo, MN; 7 grandchildren; 5 great grandchildren; a sister, Joyce Potter of New Ulm, MN; a brother, Lloyd Anderson of Valley City; several nieces and nephews. His parents; sisters, Esther Olson, Delphine Noecker, Lillian VanDrovec, and Eleanor Price preceded him in death. Funeral services will be held at 3:00 PM at the Congregational United Church of Christ in Valley City on Saturday, March 8, 2014. Pallbearers are Bud’s grandchildren, Sarah Stoudt DeBruin, Kari Berntson, Joshua Anderson, Justin Anderson, Jenna Anderson Middaugh, Dan Stoudt, and Brendan Anderson. All members of the Sanborn Fire Department, past and present, are considered to be honorary pallbearers. Burial will be in Fairview Cemetery, Sanborn, later in the spring. Please direct memorials in Bud’s honor to the Sanborn Fire Department. Funeral arrangements have been entrusted to Oliver-Nathan Funeral Chapel, Valley City. An online guestbook is available at www.oliver-nathanchapel.com

The family of Leonard "Bud" Anderson created this Life Tributes page to make it easy to share your memories.