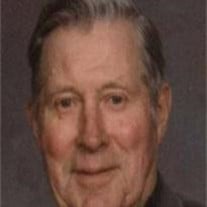 Kenneth Hubert Larson was born on June 2, 1920 in Hastings, ND, the son of Christopher W. and Lillian “Lillie” (Bjerke) Larson. He was baptized and confirmed at North LaMoure Church. He was a 1938 graduate of Ft. Ransom School, Ft. Ransom, ND. On February 19, 1942 he enlisted in the US Army and served until October 7, 1945. Hubert was united in marriage to Arlene D. Anderson on August 16, 1942 in Tullahoma, TN. They farmed with his brother Orville near Elliott, ND until the spring of 1947 when they moved to a farm near Kathryn, ND. While Hubert’s primary focus was on family and farm, he also worked for the Kathryn Farmer’s Elevator (1957-1963) and later was a rural mail carrier (1969-1989). In the fall of 1999, they retired from farming and moved to Valley City, ND. He was a member of St. Paul’s Lutheran Church since 1947. He also belonged to the VFW, American Legion, Eagles Club and the Rural Mail Carriers Association. He had served on the Oak Hill Township Board. He had many hobbies and past times. Hubert enjoyed playing cards, doing puzzles, crossword puzzles and was a fan of Wheel of Fortune. He liked baseball, horses, and spending time with his grandchildren and great grandchildren. Although he had all of these things to occupy him, his passion was bowling. Hubert is survived by his wife, Arlene of Valley City; sons, Russell (Pat) of Valley City, Robert (Jeanne Champagne) of Litchville, ND and Ritchie (Joy) of Casselton; daughters, Karen (Tom) Overn and Betty (James) Ussatis both of Valley City; 12 grandchildren and 7 great grandchildren. He was preceded in death by his parents; son, Ray; two brothers, Willard and Orville; and two sisters, Verna Tommeraus and Vivian Holm.

Kenneth Hubert Larson was born on June 2, 1920 in Hastings, ND, the son of Christopher W. and Lillian “Lillie” (Bjerke) Larson. He was baptized and confirmed at North LaMoure Church. He was a 1938 graduate of Ft. Ransom School, Ft. Ransom,... View Obituary & Service Information

The family of Kenneth Hubert Larson created this Life Tributes page to make it easy to share your memories.