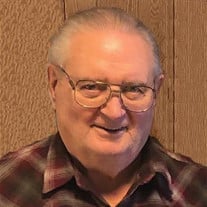 Kenneth Willson, 83, Jamestown, ND, formerly Litchville, ND, passed away at home Thursday, August 8, 2019 surrounded by his family under the care of Jamestown Regional Medical Center Hospice. Kenneth Burwell Willson was born in Valley City February 2, 1936 to JB “Duff” and Larene (Burke) Willson. He attended school in Leal, ND. Ken entered into the US Army on September 5, 1955 and was discharged July 3, 1957. On February 17, 1956 he married Marlys Linn in Hamilton, GA. Following his honorable discharge from the Army, Ken attended Moler Barber College from February 17, 1958 until graduating in the fall. They made their home in Lisbon where he operated the Lisbon Barber Shop until moving to Litchville where he owned and operated the Litchville Barber Shop. He began farming and later worked as a crop adjuster for 21 years. They retired and moved to Jamestown in 2011. He enjoyed gardening and making candy. Marlys and Ken spent a lot of time keeping up with the grandkids’ activities. Ken also liked to play cards up town with the guys in Litchville. Ken is survived by his wife, Marlys ; and children, Becky (Duane) Peterson, Bonnie (Nate) Monson, Tim (Pat) Willson; Jodi (Bob) Thoreson, Jill (Tim) Tangen; 10 grandchildren; and 10 great grandchildren. He was preceded in death by his parents, a granddaughter, Kelci Willson; 3 great grandchildren, Christine and Jasmine Peterson and Cody Little; one brother and three sisters. The memorial service will be 2 pm Tuesday, August 13, at the Oliver-Nathan Funeral Chapel, Valley City. Inurnment will be in Memory Gardens, Valley City. In lieu of flowers memorials may be given to JRMC Hospice. Funeral arrangements have been entrusted to the care of the Oliver-Nathan Funeral Chapel. An online guestbook is available at www.oliver-nathanchapel.com

The family of Kenneth Burwell Willson created this Life Tributes page to make it easy to share your memories.

Send flowers to the Willson family.