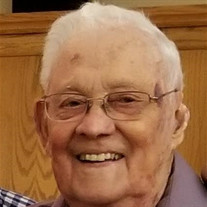 Kenneth Duane Smith died December 18, 2017 at Pioneer House in Fargo with his family by his side. Ken was born May 14, 1927 on a farm near Kathryn, ND to parents Herman Erroll Smith and Agnes Alice (Carlson) Smith. Ken grew up on a farm, attending Northland Township’s Bear Creek Country School in Ransom County from grades 1-8 and the Kathryn School in Barnes County in grades 9-10. On October 12, 1947, Ken married the love of his life, Murlyn Anderson. In 2017, the couple marked their milestone 70th anniversary together with a celebration attended by numerous friends and family members. First and foremost, Ken was a farmer. He also managed the Litchville bowling alley from 1970-1975, and later became a rural mail carrier for 14 years, retiring in 1989. He served in the United States Army from 1946-1947. For 62 years, Murlyn and Ken made their home in the Litchville, ND area, where they were active members of First Lutheran Church. Together, Ken and Murlyn had four children: Darryl (Sheryl) Smith of Rogers, ND; Vonne (Gary) Baillio of Anchorage, AK; Sheila Smith of Prunedale, CA; and Gina (Tony) Stroh of Bismarck, ND. They also had eight grandchildren and five great-grandchildren. Ken and Murlyn extensively explored the United States, regularly visited Hawaii, and also went to the Galapagos Island, Columbia, and Ecuador to reunite with foreign exchange students they hosted in North Dakota. Ken was an active member of the Farm Bureau and was also an original board member of Barnes Rural Water. In his retirement years he enjoyed golfing and loved to try new courses when he had the opportunity. Ken spent many happy hours playing pinochle, riding horses, and attending rodeos with his family. Together with Murlyn, family held a special place in Ken’s heart, and his smiles and laughter were contagious whenever he shared a warm hug with nieces, nephews, grandchildren, great-grandchildren, and anyone else fortunate enough to receive one. Ken and Murlyn’s family members extend special thanks to everyone at The Legacy Place in Valley City, Pioneer House in Fargo, and Hospice of the Red River Valley. Ken is survived by his children, grandchildren, great-grandchildren, sister and brother in law, Faye and Duane Graalum and many nieces and nephews. He was preceded in death by his wife Murlyn, his parents, siblings and spouses Howard (Pearl), Ellen (Herb), Norma (Clif), Warren (Delores), and Myrtle (who died in infancy). In lieu of flowers, Ken’s family members request that you please make a donation to the charity of your choice.

Kenneth Duane Smith died December 18, 2017 at Pioneer House in Fargo with his family by his side. Ken was born May 14, 1927 on a farm near Kathryn, ND to parents Herman Erroll Smith and Agnes Alice (Carlson) Smith. Ken grew up on a farm, attending... View Obituary & Service Information

The family of Kenneth Duane Smith created this Life Tributes page to make it easy to share your memories.

Send flowers to the Smith family.