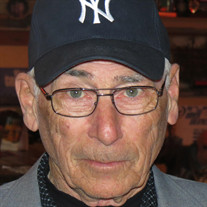 After a four-month battle in which he told his doctors he wanted to “give ‘er hell,” and he did, Kenneth Henry Schiffner died from pancreatic cancer on June 6, 2015, at St. Rose Care Center under the care of hospice. He was born on Dec. 19, 1939, to Henry and Carrie Marie Schiffner and grew up on a farm outside Englevale, N.D. He attended school through his junior year in Verona. His family then moved to a farm outside Grand Rapids and he finished school in Marion, graduating in 1957. Kenneth joined the U.S. Navy in 1957, doing basic at Great Lakes, Ill., and was stationed in Chincoteague, Va. After his father was diagnosed with cancer, he was given an honorable discharge to come home and help take care of the farm. In 1959 he met JoAnn Olafson of Litchville, after she jumped in his car one night and said you are taking me home! (This was Dad’s story anyway.) It must have worked because they were married on June 18, 1961, and made their home on a small farm outside Grand Rapids. Janelle Sue joined the family in 1963. In 1965 they moved to Litchville where Kevin Kenneth joined them. Kenneth then returned to school graduating from Wahpeton with a degree in Diesel Mechanics. In 1972 Stacy Jo completed their family. He worked for Opdahl Motors and Miller Elevator until 1975 when he and JoAnn purchased the bar from her parents renaming it Schiffner’s Recreation. Through the years he returned to his first love (farming) as much as possible working for William Boelter, Vernon and Chuck Hartman, Kelly Carlson, and Wayne Johnson. He was never happier than when returning home from a long day at the farm, the dirtier the better. We spent many Sunday afternoons driving around admiring how straight his rows were in the fields he planted. In 2011 Kenneth and JoAnn sold the bar and retired, moving south. It was only 1 ½ blocks, but as Dad said they did move south! They kept very busy in their yard and garden. Dad also took great pride in keeping Litchville beautiful, mowing empty lots, the park and the lagoon (which was once mistaken for a swimming area it looked so nice). In 2009 during the big flood he would be out working 20 hour days to save the town from flooding. He served as the local constable in the 1960s, was an active member of the Wildlife Club for many years, was on the fire department for 40 years and on the City Council for 31 years. He did take a one year break from the council but continued to do the work, so was told he might as well come back on! He once paraphrased, Ask not what Litchville can do for you, ask what you can do for Litchville. And he lived this, giving of his time, supplies and donations. Dad was always athletic. In his younger years he played basketball for Verona and Marion. And he made a point of showing Mom in his yearbook how Marion beat Litchville his senior year! He played on a LaMoure baseball team, and then softball. As the years went on he took up golfing and bowling. In his free time he enjoyed casinos (and he was always lucky), attending his grandchildren’s events, hunting (he got his big one on his last hunt in November 2014), jumping in his office (his old green pickup) and checking the local water levels at the river. And if some fish happened to jump in the pickup, well that was a bonus! He also loved watching CNN (Nancy Grace) and sports (Yankees) on TV. Kenneth is survived by his wife JoAnn, daughter Janelle (Tod) Nogosek and son Kevin (Teresa) Schiffner. His grandchildren Kory (Lindsey) Nogosek, Taylor Nogosek, Brittany (Robert) Ogren, Breean Schiffner, Halie (Taylor) Weight, Roddy Gentzkow Jr. and Rory Gentzkow. His great-grandchildren Remy Nogosek, Maci Ogren, Brody and Paislee Weight. A brother Richard (Patty) Schiffner and a sister Dorothy Banderet. Three nephews Todd, Troy and Terry Schiffner. Also three brothers-in-law, Dennis Olafson, Terry (Joyce) Olafson, Les Olafson and many more nieces, nephews and cousins. He joins in heaven his parents Henry and Carrie Marie Schiffner, his stepdad Harvey Gott, his daughter Stacy Gentzkow and grandson Brett Nogosek. Funeral service will be held on Thursday, June 11, at 10:30a.m. at First Lutheran Church in Litchville, with visitation starting at 9:30 arranged by Oliver-Nathan Funeral Chapel of Valley City, N.D. In honor of Dad, please dress casually. In lieu of flowers memorials may be directed to the Litchville City Park or Litchville Fire Dept. Dad would never say good-bye, he said it was too final. So as he would say, “Yep. We’ll see you later.” Funeral arrangements for Ken have been entrusted to Oliver-Nathan Funeral Chapel, Valley City, ND. An online guestbook is available at www.oliver-nathanchapel.com

After a four-month battle in which he told his doctors he wanted to &#8220;give &#8216;er hell,&#8221; and he did, Kenneth Henry Schiffner died from pancreatic cancer on June 6, 2015, at St. Rose Care Center under the care of hospice. He was... View Obituary & Service Information

The family of Kenneth Schiffner created this Life Tributes page to make it easy to share your memories.

After a four-month battle in which he told his doctors he wanted...

Send flowers to the Schiffner family.