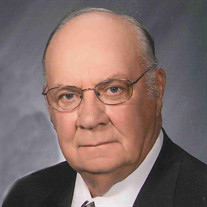 Kenneth Harstad was born April 7, 1935 in Valley City, ND to Clifford and Marie (Benham) Harstad. He grew up on a farm near Rogers, ND while attending school in Rogers. After finishing school, he started farming with his father. In 1957, he joined the National Guard. He took his basic training at Fort Leonard Wood in St. Louis, MO. He was honorably discharged in 1963. He married Janice Lausch at Our Savior’s Lutheran Church in Dazey, ND in September 1958. They had three children, Kevin, Robert, and Sandra. Ken was a member of the Bethel Lutheran Church in Rogers and served in the council. He belonged to the Rogers Gun Club and the Eagles Club in Valley City. Ken drove school bus for 7 years for the North Central School District. As a young man, he enjoyed hunting, bowling, riding snowmobiles with his friends and family. He always looked forward to family coming home for gatherings. Ken enjoyed having coffee with the elevator group. His hobbies included collecting toy and antique tractors and painting. Ken died at the Sheyenne Care Center in Valley City on December 7, 2014 at the age of 79. He is survived by his wife, Janice of Valley City; children, Kevin (Donna) Harstad, Robert (Darla) Harstad both of Rogers, ND, and Sandra (Paul) Blomquist of Fargo, ND; 7 grandchildren, Jessica (Matt Jenrich) Harstad of Valley City, Brian (Alicia) Harstad of Rogers, Jacob and Jonah Harstad of Rogers, Brett, Jaden, and Nicholas Blomquist of Fargo; a great granddaughter, Kaidence Harstad; and many nieces and nephews. He was preceded in death by his parents; brothers, Arlen and Darrel; and a sister-in-law, Lois Harstad-Smith. Funeral arrangements have been entrusted to Oliver-Nathan Funeral Chapel, Valley City. An online guestbook is available at www.oliver-nathanchapel.com

Kenneth Harstad was born April 7, 1935 in Valley City, ND to Clifford and Marie (Benham) Harstad. He grew up on a farm near Rogers, ND while attending school in Rogers. After finishing school, he started farming with his father. In 1957,... View Obituary & Service Information

The family of Kenneth Harstad created this Life Tributes page to make it easy to share your memories.

Send flowers to the Harstad family.