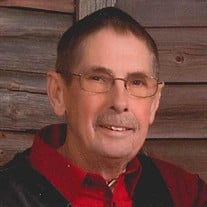 Kenneth John Gusaas, 74, rural Litchville, North Dakota, passed away on October 12, 2017 at his home with his family by his side and under of the care of Hospice of the Red River Valley. Kenny was part of a cancer study at Roger Maris Cancer Center which resulted in a prescription drug for cancer. He lived courageously with Multiple Myeloma Cancer for the past 12 years. Kenny was born May 19, 1943, the son of John and Alma (Salthammer) Gusaas. He was baptized and confirmed at Spring Creek Lutheran Church in Hastings, North Dakota. He attended grade school at Skandia School and went on to graduate from Litchville High School. On August 17, 1963, he married Karen Opdahl. They lived in Valley City, North Dakota, for a short time before moving to the farm southeast of Litchville in 1965. Kenny and Karen rented their farm out in 1989 and Kenny then worked for area farmers. He drove school bus for many years and was a member of the ND National Guard at Valley City from 1961-1967. Kenny served on the Spring Creek Cemetery Board for 20 years. Kenny is survived by his wife, Karen, and three sons, Jason Gusaas, Litchville; Chad (Brenda) Gusaas, Apple Valley, Minnesota; and Nathan (Sarah) Gusaas, Litchville; four grandchildren, Sage Gusaas, Litchville; Carson Gusaas, Jade and Kaleb Gunderson, all of Apple Valley; and one brother, Howard Gusaas, Great Falls, Montana. He was preceded in death by his parents, two brothers, Milford and Donald; and three sisters, Enid Harstad, Jean Olson and Carol Derheim. Funeral services will be 10:30 am, Monday, October 16th, at First Lutheran Church, Litchville. Visitation will be 4-6 pm, Sunday, October 15th, at the Oliver-Nathan Funeral Chapel, Valley City. Visitation will continue one hour before the service at the church. Burial will be in Spring Creek Cemetery with military honors. Funeral arrangements have been entrust to the care of the Oliver-Nathan Funeral Chapel. An online guestbook for Kenny may be found at www.oliver-nathanchapel.com

Kenneth John Gusaas, 74, rural Litchville, North Dakota, passed away on October 12, 2017 at his home with his family by his side and under of the care of Hospice of the Red River Valley. Kenny was part of a cancer study at Roger Maris Cancer... View Obituary & Service Information

The family of Kenneth John Gusaas created this Life Tributes page to make it easy to share your memories.

Send flowers to the Gusaas family.