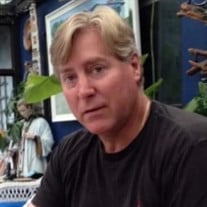 Keith Duane Wolhart of Pacific Grove, CA passed away March 29, 2020 under Hospice Care in Salinas, CA after a three year battle with cancer. A celebration of life service will be held 2:00 pm, Monday, September 14, 2020 at Memory Gardens, Valley City, ND. Keith, the son of Doris and Arden Wolhart, was born June 2, 1957 and raised to maturity in Valley City. After graduating from VCHS, he moved to Minneapolis to attend Northwestern College majoring in Business. He then moved to California and attended Monterey Peninsula College. During Keith’s lifetime he was active in theater, acting and singing, creating props and backgrounds using his carpentry skills. Keith traveled the world with the Southern California Choir to Paris, the London Olympics, and touring Italy and China. As a self-employed contractor, Keith remodeled homes in the Monterey Bay Area with integrity and skill. Keith is survived by his mother, Doris Wolhart, Valley City; his siblings, Nancy Wolhart, Fargo, ND, Calvin (Jewel) Wolhart, Jamestown, ND, Arlene (Kevin) Knudson, Larimore, ND, Neal (Heather) Wolhart, Crawford, NE; sister-in-law, Becky Wolhart, Valley City; and many nephews and nieces. The family would like to express their gratitude to Keith’s special friend, Diane Striplin Ehlers, who took care of him during his illness. Keith was preceded in death by his father and a brother, Glenn Wolhart. Funeral arrangements have been entrusted to the care of the Oliver-Nathan Funeral Chapel, Valley City. An online guestbook is available at www.oliver-nathanchapel.com

The family of Keith Wolhart created this Life Tributes page to make it easy to share your memories.

Send flowers to the Wolhart family.