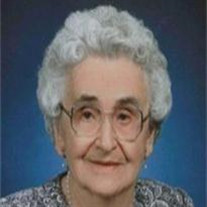 Katie Gertrude Noeske was born July 18, 1909 in Belgard, Germany, the daughter of Fred and Eliese (Jahnke) Noeske. She was baptized and confirmed into the Lutheran Faith in Germany. Katie attended school until the 8th grade while living in Germany. As was tradition, she had to pick a trade while still in school, her choice was to become a seamstress. In 1925, she and her parents immigrated to the United States. They settled in Noltimier Township, in rural Barnes County, ND. She attended Noltimier School, and learned the English language. In May 1931, she graduated as Valedictorian and went on to Valley City Teacher’s College to further her education. On September 27, 1934, she was united in marriage to Henry T. Bruns at the Bruns Farm. They made their home in Alta Township and farmed there until 1942 when they moved to Noltimier Township. This was where she raised her family. Henry died on November 10, 1981. Katie continued to live on the farm until 1984, when she moved to Valley City, ND. Katie’s faith was always an important part of her life. After moving to the United States, she became a member of Salem United Methodist Church. When Salem closed, she transferred her membership to Epworth United Methodist Church. As a resident of the Sheyenne Care Center, she always enjoyed Chapel and Bible study. She was always a gracious hostess. Following the trade she chose as a young girl, she made clothes for her children and herself. In addition to sewing, she did many kinds of handwork including knitting, hardanger, cross stitch, crocheting and quilting. Katie died on May 14, 2011 at the Sheyenne Care Center in Valley City. She is survived by her son, Henry F. (Sandra) Bruns of Valley City; daughters, Kathleen (Dick) Winter of Valley City and Shirley (Ted) Mahaffey of Marion, NC and Valley City; 7 grandchildren, Steve (Robin) Winter, Dianne (Brad) Graff, Todd Mahaffey, Wade (Kimberly) Bruns, Debra (Mike) Kimbell, Mark (Andrea) Winter, and Dain (NataSha) Bruns; 11 great grandchildren, Kylie and Colton Winter, Leah (Josh) Hoffman, Logan Becker, Michael (Jerri) and Nicholas Bruns, Anna and Jesse Kimbell, Brenna, Ellie, and Trevor Winter, and Dalen and Owen Bruns. She was preceded in death by her parents; husband; and a brother, Paul Noeske.

Katie Gertrude Noeske was born July 18, 1909 in Belgard, Germany, the daughter of Fred and Eliese (Jahnke) Noeske. She was baptized and confirmed into the Lutheran Faith in Germany. Katie attended school until the 8th grade while living in... View Obituary & Service Information

The family of Katie Bruns created this Life Tributes page to make it easy to share your memories.

Send flowers to the Bruns family.