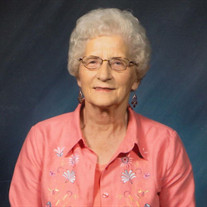 The funeral service for Kathleen Wright, 89, Valley City, North Dakota, will be 10:30 am Saturday, January 25 at Epworth United Methodist Church, Valley City. Visitation will be one hour before the service at the church. She died January 21, 2020 at the Sheyenne Care Center, Valley City. Kathleen Ruth Rose was born May 20, 1930 in Courtenay, North Dakota, the daughter of John and Susan (Bultema) Rose. She attended Pierce School until the 6th grade and then attended Wimbledon school where she graduated in May of 1948. Kathleen was united in marriage to Lowell Wright at the St. John’s Methodist Church, Wimbledon. They made their home in Valley City where they owned and operated Smith Lumber for many years. She was an active member of Epworth United Methodist Church, American Legion Auxiliary, Mercy Hospital Auxiliary, Chapter Z P.E.O. and Wild Rose Red Hats. She was also a Cub Scout den mother. Kathleen is survived by six children, Susan (Bill) Suominen, Cloquet, MN, David Wright, Valley City, Peggy (Bill) Hoff, Waterloo, IA, Janet (Tim) Schilling, Park Rapids, MN, Judy (Dwight) Davis, Sheboygan, WI and James (Diana) Wright, Valley City. She is also survived by a brother, Bill (Darlene) Rose, Rothsay, MN, 13 grandchildren and 18 great grandchildren. She was preceded in death by her parents, husband, Lowell, who passed away September 6, 1997, a sister Jean Falk and a brother Jack Rose. The family would like to thank the Sheyenne Care Center Cottage staff for their care of Katie and also a thank you to CHI Mercy Hospice. Memorials may be designated to CHI Mercy Hospice or to a charity of your choice. Funeral arrangements have been entrusted to the care of the Oliver-Nathan Funeral Chapel, Valley City. An online guestbook is available at www.oliver-nathanchapel.com

The funeral service for Kathleen Wright, 89, Valley City, North Dakota, will be 10:30 am Saturday, January 25 at Epworth United Methodist Church, Valley City. Visitation will be one hour before the service at the church. She died January 21,... View Obituary & Service Information

The family of Kathleen "Katie" Wright created this Life Tributes page to make it easy to share your memories.

Send flowers to the Wright family.