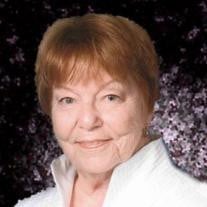 Kathleen Bruhn passed away Jan.9, 2013, after a long battle with Cancer, at the Providence Hospital in Portland, Oregon. Kathleen was born July 3, 1928 in North Lamoure to Ingvald and Olga (Grindahl) Smedshammer. She attended grade school... View Obituary & Service Information

The family of Kathleen Tangen Bruhn created this Life Tributes page to make it easy to share your memories.

Send flowers to the Bruhn family.