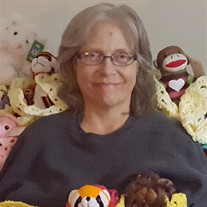 The memorial service for Karen Marie McCubbin, 58, Valley City, North Dakota will be 3 pm Saturday, September 23, 2017 at Church of the Nazarene, Valley City. Karen Marie Olson was born February 15, 1959 in Fargo, North Dakota, the daughter of William Boyd and Julie Louise (Buchanan) Olson. She grew up in Fargo where she attended school. Karen attended Woodrow Wilson alternative school for two years before moving to Montana to care for her aunt. After turning 18 she went to San Francisco, California for a time. She then moved to Missouri where she met and married Paul McCubbin. They had two children there before moving to Fargo to be closer to her family. They raised four more children in Fargo. Karen worked for the Fargo Public School System as a paraprofessional and a lunchroom aid. In 1998, she moved her family to Valley City where she had fallen in love with the small town atmosphere. She had worked at Valley City Public Works and most recently worked at ServiceMaster. She enjoyed working there and made many friends. It was thru Don and Pam Nelson that she became active in the Church of the Nazarene where she accepted Jesus into her heart. Karen enjoyed spending her spare time with her children and grandchildren. Most recently she was making gifts for the Christmas Child Project thru the church. She is survived by her children, Jason McCubbin, Tucson, Arizona; Jeremy McMubbin, Justen (Tammy) McCubbin, and Jared McCubbin, all of Fargo; Jennifer (Thomas) Teske, Mandan, North Dakota, and Jay (Verena) McCubbin, Weinheim, Germany and several granchildren. Karen is also survived by two sisters, Donna Lee Ford and Penny Long; and two brothers, Richard Olson and David (Bonnie) Olson all of Fargo. She is preceded in death by her parents, a nephew, Jeremy Richard Olson and an uncle, Paul Sande. Karen died Tuesday, September 19, 2017 at Mercy Hospital. Arrangements are by the Oliver-Nathan Funeral Chapel, Valley City, North Dakota. An online guestbook is available at www.oliver-nathanchapel.com

The family of Karen Marie McCubbin created this Life Tributes page to make it easy to share your memories.

Send flowers to the McCubbin family.