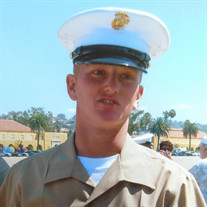 Justin Daniel Tangen, beloved son, brother, and friend, passed away on May 13, 2017, at the age of 27. Justin was born November 8, 1989, to Todd Tangen and Leah (Etzell) Tangen in Valley City, ND, and was raised in Kathryn, ND. Justin was preceded in death by his paternal grandmother, Faye Tangen; maternal grandfather, Melbourne Etzell; his uncle, Daniel Tangen; and his aunt, Melody Hetland. Justin was active in many activities throughout his school years in Valley City including Boy Scouts, wrestling, golf, and football. Justin joined the United States Marines in 2007, left for training shortly after his high school graduation, and was honorably discharged in 2013 at the rank of Corporal. During his time in the US Marines Justin was trained in Virginia, stationed in California as well as Washington, and completed a tour in Afghanistan in 2012 as a part of operation Enduring Freedom. Justin had great love for the friends who became his US Marine family. During the time he served he touched many lives with his ability to befriend anyone. Justin had a unique way of not only seeing the good in people but finding a way to bring it out in them. Justin returned to Valley City in 2013. He enrolled as a student at Valley City State University, where he studied Environmental Sciences and later Nursing and was placed on the Dean’s List in 2013, as well as the President’s list in both 2014 and 2015 for grade point averages of 3.5 and 4.0. Justin made many friends throughout his college time and greatly enjoyed various hobbies including fishing, hunting, setting up fish aquariums, gardening, working on cars, and computers. Justin dedicated his life to improving the lives of others from his time spent in the US Marines to his studies of ways to improve the ability to grow crops in countries with poor soil quality as well as his plans of becoming a nurse. Justin was an incredibly kind soul who will be deeply missed by all those who knew him. He had a sense of humor that was unparalleled and an uncanny ability to bring laughter and smiles into the lives of anyone he talked to. He was the kind of person that everyone was proud to call son, grandson, family, or friend. Justin’s life will be celebrated and remembered Thursday, May 18th, during a prayer service at Our Savior’s Lutheran Church in Valley City with visitation beginning at 5 p.m. and the prayer service starting at 7 p.m. His funeral service will be held at Waldheim Church 2 miles east of Kathryn on Friday, May 19th, at 2 p.m. Justin is survived by his parents, Todd and Leah Tangen of Kathryn, ND; his brothers, Jake Tangen and Michael Tangen (Sidney Falstad) of Kathryn, ND; his paternal grandfather, Neil Tangen of Kathryn, ND; his maternal grandmother, Elizabeth Etzell of Valley City, ND; his significant other, Sarah Rippley of Valley City, ND; and numerous aunts, uncles, and cousins.

Justin Daniel Tangen, beloved son, brother, and friend, passed away on May 13, 2017, at the age of 27. Justin was born November 8, 1989, to Todd Tangen and Leah (Etzell) Tangen in Valley City, ND, and was raised in Kathryn, ND. Justin was... View Obituary & Service Information

The family of Justin Daniel Tangen created this Life Tributes page to make it easy to share your memories.

Send flowers to the Tangen family.