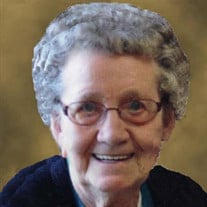 June Muriel Braisted, 99, Jamestown, North Dakota, formerly of Valley City and Hope, North Dakota, died Saturday, June 17, 2017 at Ave Maria Village, Jamestown. She was born May 5, 1918 at Virginia, Minnesota, the daughter of John and Hannah (Hoel-Olson) Lerstad. June was a graduate of Virginia Junior College and Winona State Teachers College. She taught school in Warroad, Minnesota, Alpena, Michigan and then returned to Virginia to teach until she was married to Lloyd Braisted on June 14, 1953. They made their home on a farm near Hope. June taught school in Pillsbury, ND for the 1969-1970 school year. Lloyd passed away on November 6, 1980. She continued to make her home in Hope until moving to Valley City in 1990. She moved to Jamestown in 1999 and in April of 2007 she became a resident of Ave Maria Village. She is survived by two sons, James Braisted, Jamestown, and John Braisted (Evelyn Springer), Lincoln, Nebraska; two grandsons, Mark Braisted, Bismarck, ND and Matthew (Stephanie) Braisted, Harrison, Tennessee; and two great granddaughters, Helen and Robin Braisted. She is also survived by a brother and sister-in-law, Oliver and Marilyn Lerstad, Torrance, California; two nephews and three nieces. June was preceded in death by her parents and husband. Visitation will be Tuesday, June 20, at Oliver-Nathan Funeral Chapel, Valley City and friends may call from 4-5 pm. There will be no viewing. A graveside service will be 10:30 am Wednesday, June 21, 2017 at Hope Cemetery, Hope, North Dakota and a memorial service will be 1:30 pm Thursday, June 22, at Ave Maria Village Chapel, Jamestown. Funeral arrangements have been entrusted to the care of the Oliver-Nathan Funeral Chapel, Valley City. An online guestbook is available at www.oliver-nathanchapel.com

The family of June Muriel Braisted created this Life Tributes page to make it easy to share your memories.

Send flowers to the Braisted family.