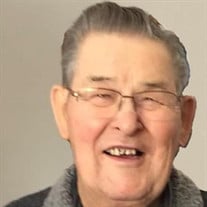 Julius Vernon Reitan was born May 18th, 1935, in Hawley, MN to Joel and Theoline (Albertson) Reitan. As a young boy, he moved to Page, ND with his family, and attended rural school near Lake Ashtabula in rural Barnes County. On July 2, 1959, Julius married Shirley Elaine Linerud, and together they welcomed their son Scott Vernon Reitan in March 1963, then a daughter, Kristine Ann Reitan in August 1966. Julius built his career within The Valley City Public Works institution, working there for almost 40 years, retiring in June 2002. There he was known as mister fix it all, from attending bursting water pipes in the winter to machine equipment, anything related to ensuring citizens of Valley City had their utilities and services always running. His skills were best described by his daughter’s words “my daddy can fix anything”. Julius was a member of Our Savior Lutheran Church and in his spare time, he enjoyed fishing and hunting, and countless socializing activities with family and friends. Julius died at Sanford hospital in Fargo on July 7th, 2021, after a brief ceremony highlighting his military service as a member of the United States Army. Julius served in the US Army from 1955 to 1957, during which time he was stationed in Greenland. He then joined the reserve until 1963. Julius is survived by his daughter Kristine Maucort of Fargo, 2 granddaughters, Sierra Kahler and Alexis Maucort, both of Fargo, his companion of recent years Lorraine Nitschke and his brother Al. He was preceded in death by his parents, his wife Shirley, son Scott, brothers John, Ben, Tom and sisters Eleanor, Thelma, Clara and Rosana. The funeral service will be 10 am Thursday, July 15, 2021, at Our Savior’s Lutheran Church, Valley City. Visitation will be 5-7 pm Wednesday at the Oliver-Nathan Funeral Chapel, Valley City, and one hour before the service at the church. Burial will be in Memory Gardens, rural Valley City. Funeral arrangements have been entrusted to the care of the Oliver-Nathan Funeral Chapel. An online guestbook is available at www.oliver-nathanchapel.com

Julius Vernon Reitan was born May 18th, 1935, in Hawley, MN to Joel and Theoline (Albertson) Reitan. As a young boy, he moved to Page, ND with his family, and attended rural school near Lake Ashtabula in rural Barnes County. On July 2, 1959,... View Obituary & Service Information

The family of Julius Vernon Reitan created this Life Tributes page to make it easy to share your memories.

Send flowers to the Reitan family.