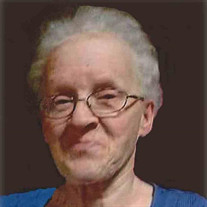 The funeral service for Judith “Judy” Northridge, 70, Rosholt, South Dakota, formerly of Valley City, North will be 10 am Friday, February 17, 2017 at Epworth United Methodist Church, Valley City. Burial will be in the spring in Woodbine Cemetery, Valley City. She died at Eventide Nursing Home, Fargo, North Dakota. Judith Nadine Northridge was born September 26, 1946. She was the daughter of Hilton and Bernice (Nelson) Christ. She graduated for Barnes County North in 1965. She worked as a nurse’s aide at Mercy Hospital. She was united in marriage to John ‘JD’ Northridge on January 21, 1970. They made their home in Valley City where they raised their children. She began working at Washington School and Valley City High School assisting with dishwashing and did custodial work at Washington School until retiring. She was a caregiver for her mother until her mother passed away. JD and Judy moved Rosholt, SD in 2015. Judy was a member Epworth United Methodist Church and United Methodist Women; she was a member of the VFW, Eagles, AmVets, and DAV auxiliaries. She is survived by her husband, a son, Benjamin Northridge, Valley City; two daughters, Lori Northridge, New Rockford, North Dakota and Melissa (Michael) Earl, Rawlins, Wyoming; 10 grandchildren and four great grandchildren; and a brother Terry (Elizabeth) Christ, Hunter, North Dakota. Judy was preceded in death by her parents and a daughter, Sheria Lunde. Funeral arrangements have been entrusted to the care of the Oliver-Nathan Funeral Chapel, Valley City. An online guestbook for Judy is available at www.oliver-nathanchapel.com

The funeral service for Judith &#8220;Judy&#8221; Northridge, 70, Rosholt, South Dakota, formerly of Valley City, North will be 10 am Friday, February 17, 2017 at Epworth United Methodist Church, Valley City. Burial will be in the spring in... View Obituary & Service Information

The family of Judith Nadene Northridge created this Life Tributes page to make it easy to share your memories.

Send flowers to the Northridge family.