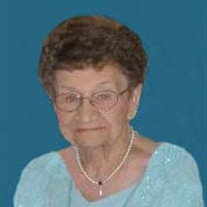 Josephine Lucille Koch passed away peacefully at home on the morning of May 1, 2014, in Valley City, ND, surrounded by family, caregivers, and under the care of Hospice. She was 92 years old. Jo was born on December 15, 1921 in Ayr, ND, the daughter of George and Josephine Rueckert. Jo was known for her practicality, tenacity, the beautiful twinkle in her eye, her kind smile and listening ear, her love of candy and coffee, and her hard work ethic. She earned her teaching degree from Valley City State University and spent time as a teacher and basketball coach at Alderman, Grand Prairie, and Logan. She was also a member of the Ashtabula Homemaker’s Club. On August 25, 1944, Jo married Theodore “Ted” Koch. He proposed to her on their first date. After they were married Ted and Jo farmed at the home place with his dad. Ted began hauling cars for McKee Trucking and they moved to work for a time in Rosemount, MN. They then returned to the family homestead to continue their lifelong career of farming. Ted and Jo enjoyed dancing together, bowling, traveling, playing Pinochle, and having coffee with friends. After Ted was diagnosed with Alzheimer’s, Jo took wonderful care of him for 13 and ½ years at home. Jo and Ted were married for more than 60 years before Ted’s passing on June 30, 2005. Their favorite saying was “together we stand, divided we’re stuck.” They shared a true love. Jo loved her Lord and had a deep and quiet faith. A proud resident of Valley City, Jo was a committed wife, mother, grandmother, great-grandmother, teacher, coach, and friend. Jo was not one to want the spotlight but was always willing to help out and work quietly in the background. She enjoyed spending time with family, visiting with friends, attending church, gardening, homemaking, and sewing, and playing the piano. She was inducted into the ND Basketball Hall of Fame along with her Ayr basketball team which had won the state championship seven times. During her first year coaching at Grand Prairie, she brought her team to second place in the state, runner-up to her Alma Mater, Ayr. She continued to enjoy sporting events throughout her lifetime. Jo was also known for her delicious homemade buns. She loved to watch the “Price is Right,” the Polka Party and loved listening to Little House on the Prairie stories. Jo loved hummingbirds and was teased that she ate sugar like them too. She also was affectionately known as “The Energizer Bunny.” Jo was preceded in death by her husband Ted; her son Kelly Koch; her parents, George and Josephine Rueckert; one brother, Alfred and a sister, Florence as well as several brothers and sister in laws and nieces and nephews. Jo is survived by sons Gene (Carolyn) of Sidney, MT, and Randy (Peggy) of Luverne, ND; daughter Jodie (Lonney) Scherr of Valley City, ND; grandchildren Kelly (Ann-Marie) Koch; Tara (Shawn) Harrison; Katelyn (Wade) Peterson; Naomi Koch; Natalie Koch; Joseph (Rachael) Koch; Beau (Jessica) Noeske; Mattie (Rafael) Graciano; Michaela Scherr; Grace Scherr; and Gabriel Scherr; great-grandchildren Kyler, Kellen, Cole, and Annie Harrison; Sadie, Molly, and John Koch; Zoey Koch; Jonah Koch-Helgeson; Trenton and Jessa Koch. A sister, Mary Peterson, Fargo, ND and several brother-in-laws and sister-in-laws also survive. Jo will be deeply missed by her family, friends, and caregivers. She will always be loved and remembered. Visitation will be from 4 pm to 7 pm with a prayer service at 7:00 P.M., Thursday, May 8th (Ted Koch’s birthday) at Oliver Nathan Funeral Chapel. The funeral will be held Friday, May 9th at 10:00 A.M. at the Congregational Church. Funeral arrangements for Jo have been entrusted to the Oliver-Nathan Funeral Chapel, Valley City, ND. An online guestbook is available at www.oliver-nathanchapel.com

Josephine Lucille Koch passed away peacefully at home on the morning of May 1, 2014, in Valley City, ND, surrounded by family, caregivers, and under the care of Hospice. She was 92 years old. Jo was born on December 15, 1921 in Ayr, ND, the... View Obituary & Service Information

The family of Josephine L. Koch created this Life Tributes page to make it easy to share your memories.

Josephine Lucille Koch passed away peacefully at home on the...

Send flowers to the Koch family.