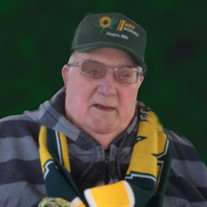 On December 14, 2014, John M. Ihry found peace when he joined his wife and son in a better place. John was born April 4, 1931, to Theresa and John H. Ihry. He was raised along with 8 other siblings on a farm near Luverne, ND. John met the love of his life, Darlene Jensen, and they married on October 17, 1953. They lived on a farm near Pillsbury, ND where they raised their four children: Warren, Teri, Shelly and Jane. They were active in the community through their involvement on the Pillsbury School Board, Baldwin Township, and the Luverne Elevator. Their biggest interest was in their children’s lives and creating a strong family unit. After a number of years, Darlene suffered a long, courageous battle that took her life in 1979. Five years later, John’s son Warren was killed in a farm accident. John’s scope of farming was never the same thereafter, but he remained on the farm that he loved until his retirement. At that point he moved to Hope, ND, where he had much family and many friends. Everyone knew “Big John” when he walked in a room, and people of all ages loved being around him. John enjoyed golfing, playing cards, going to the elevators, going to the café, and visiting family during his years in Hope. Brother Bob and sister-in-law Connie were instrumental in John being able to enjoy time in Hope as long as he possibly could. They were caretakers for John in many ways. Eventually, John moved to Fargo where he lived in Edgewood Assisted Living and Bethany on 42nd until his death. John was preceded in death by his wife, Darlene (Jensen) Ihry; his son, Warren Eugene Ihry; his siblings, Edna (Ihry) Jacobson, Leo Ihry, Elmer Ihry, Marie (Ihry) Thomsen, Adolph Ihry, and Kenneth Ihry. He will be deeply missed by his daughters, Teri (Mike) Kraft of Bismarck, ND, Shelly Morgan (Tom Klock) of Apple Valley, MN, and Jane (John) DiBrito of West Fargo, ND; his siblings, Margaret Gunderson of Hope and Bob (Connie) Ihry of West Fargo; his grandchildren, Dustin (Kim) Laber, Kelli (Lucas) Isaacson, Tara Laber, Lindsay Morgan and Kameron (Keri) Ihry-Hodem; great grandchildren, Bailey Laber, Blake Laber, Blase Isaacson and Ella Isaacson; step-grandchildren, Michael Joe Kraft, Matthew (Desiree) Kraft and their children, Gabriel and Isabelle, and Annie (Bobby) Schaffer. The funeral service for John M. Ihry, 83, will be held at 10:00 AM, Wednesday, December 17, 2014, at St. Agatha Catholic Church, Hope, ND. Burial will be in the Hope Cemetery. Visitation will be held in the church on Tuesday from 5:30 PM until 7:00 PM. The Rosary will be prayed beginning at 6:30 followed by a prayer service beginning at 7:00. Oliver-Nathan Funeral Chapel of Valley City, ND has been entrusted to help John’s family with arrangements. Please visit www.oliver-nathanchapel.com to sign the online guestbook and view the video tribute in John’s memory.

On December 14, 2014, John M. Ihry found peace when he joined his wife and son in a better place. John was born April 4, 1931, to Theresa and John H. Ihry. He was raised along with 8 other siblings on a farm near Luverne, ND. John met the... View Obituary & Service Information

The family of John Ihry created this Life Tributes page to make it easy to share your memories.

Send flowers to the Ihry family.