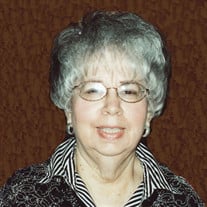 Joan Arlene Falstad, 77, passed away Tuesday, October 1, 2019 at Sheyenne Care Center, Valley City, ND. Visitation will be held at St. Catherine’s Catholic Church, Valley City, on Thursday, October 3 from 5:00pm to 7:00 pm with a prayer service beginning at 7:00 pm. A funeral mass will be celebrated at 10:30 am, Friday, October 4 at St. Catherine’s Catholic Church, Valley City. Joan Arlene Marchand was born January 7, 1942 in San Francisco, California to Raymond and Edna (Anderson) Marchand. She began school in San Francisco until moving to the Fargo – Moorhead area, graduating from Moorhead High School. During high school and after graduation, Joan worked at St. John’s Hospital in Fargo as a candy striper and later worked at Perkins Restaurant, downtown Fargo. Joan married Mylo Falstad June 24, 1961 at St. Joseph’s Catholic Church in Moorhead living in Moorhead for two years and then purchased a home in West Fargo, ND. In 1966, they moved to the Falstad Farm near Hastings, ND where they farmed and their children attended school in Kathryn, ND. In 1991, they retired from farming and moved to Valley City in 1995. Joan was a member of St. Catherine’s Catholic Church in Valley City. She was active in volunteering, a member of the Hastings homemaker’s club, Catholic Daughters', and quilting club. Joan also enjoyed her “Coffee Cup” bowling league and weight watchers. Joan took the most pride in her family, she knitted blankets for all of her grandchildren and enjoyed following her children and grandchildren to all of their activities with Mylo. Joan is survived by her husband Mylo; sons, Jeffrey (Kristy) Falstad, LaMoure, ND and Paul (Tammy) Falstad, Kathryn, ND; daughter, Joy (Ritchie) Larson, Casselton, ND; eight grandchildren; two great-grandchildren and sister Patricia Peterson of Rochester, MN. She was preceded in death by her parents, a sister Laura Marchand, and grandson Jordan. Funeral arrangements have been entrusted to the Oliver-Nathan Funeral Chapel, Valley City. An online guestbook is available at www.oliver-nathanchapel.com

The family of Joan Arlene Falstad created this Life Tributes page to make it easy to share your memories.

Send flowers to the Falstad family.